“Every man desires to live long, but no man wishes to be old.” 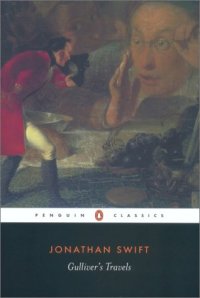 Think of Gulliver’s Travels and you probably think of a guy in period costume tied to the ground with string. It’s a children’s story now. It’s comical.

It turns out that there is an excellent reason for this.

Gulliver’s Travels was originally written as a bitter satire against, well, everything, it seems, but primarily Humans in England. Captain Gulliver does not only visit the tiny Lilliputians, but also the Brobdingnagian Brobdingnagians, the inhabitants of the flying island of Laputa, and the horse-like Houynhnhms. Which all sounds vaguely entertaining and interesting, doesn’t it?

Well, it isn’t. Much of the satire in Gulliver’s Travels is, being 300 years old (gosh, I hadn’t thought of that before), unrecognisable and thus only comprehensible through extensive notes. It seems to me that satire that needs to be explained has probably exhausted its purpose.

This would be unproblematic if the story worked, but…it doesn’t. Frankly, it’s dull and slow-moving. Gulliver seemingly has no meaningful relations with any of the people he meets, apart from despising them or wishing he was somewhere else; most of the book consists of his listing the political structures of the different countries. Also, he appears to speak every single European language like a native, and to be able to become fluent in a new language in the simple matter of three months, which somehow seems implausible to me.

There’s a reason we only remember one scene from this book, and that’s because it’s the only vaguely interesting one. Gulliver’s Travels is just dull, dull, dull all the way through.