“Let us go on and take the adventure that shall fall to us.” 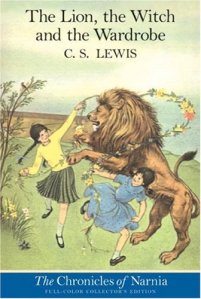 It’s going to be a flying visit today, Constant Reader, because it’s already nearly 2am, and, as we all know from How I Met Your Mother, nothing good ever happens after 2am. And that’s a rule that applies to blog posts too.

So I reread The Lion, the Witch and the Wardrobe for my Children’s Literature course. The basic premise, if you’ve been living in a cave for the last century, is that four children evacuated to a large country house fall through a wardrobe into a magical land full of talking animals which is ruled by the evil White Witch, who has cast spells which ensure that it’s always winter but never Christmas in Narnia. And, obviously, the children must Save the Day.

But, because Lewis was Christian, they must have some help from Aslan, a lion who is an extremely thinly disguised version of Jesus. (Not, I have to say, that I particularly noticed this when I was eight.) Now, the Narnia series has got a lot of flak recently (especially after the release of the films) for its openly Christian agenda, and it’s true, it’s very, very Christian. But my feeling – one that surprised me, actually, on re-reading the book – is that the Christian imagery is more…well, bolted on to a story which is, in fact, about something infinitely stranger and more interesting. Because, let’s be clear: Narnia in its summer is not heaven. It’s certainly not very Christian, not with midnight dances with nymphs and dryads and Bacchus the pagan god rocking up to get everyone drunk “for weeks on end”. Narnia is dangerous, too: there are forests there filled with mysterious and magical creatures, with quests and adventures and darkness. It’s a fairytale world, and we all know how fairylands are – tricksy.

It’s a story which reminded me very much of one fairytale in particular: Hans Christian Andersen’s “The Snow Queen”. Now, to me, that’s a story about the freezing of natural emotion, and natural development. And so I wondered if perhaps the story of Narnia is like that too: the White Witch is freezing, repressing, the natural energies of Narnia, the wild freedom of dances under the stars and Bachannalian revels. I know comments are annoying on this blog (thank you, blog.com), but I was wondering – what do you think Lewis’ books are “really” about? Because there’s definitely something more than a rather clumsy Christian allegory going on here, and I can’t quite put my finger on it.