“What is community but a means to… for all we individuals to have… our choices.” 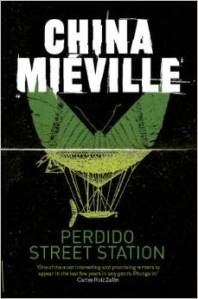 I’m a little overexcited at the prospect of reviewing this book, so I’m going to try and work methodically so as not to overrun this post with capital letters and squees. Apologies in advance for any Incoherent Mumbling that may or may not occur.

I’ve thought for a while that maybe Mieville might be a good author to read, and what really cemented that idea for me was reading a Strange Horizons review of The City and the City recently. So when I found myself with nothing to read, I headed straight for the M section of the SFF bit that’s always hidden away in a corner of Waterstones. What I wanted, I decided, was a really fat book, so I didn’t have to buy any more for a while. And Perdido Street Station (to cut a long story short) was the fattest Mieville book on sale (as well as possibly one of the fattest books in the shop – it runs to nearly 900 pages in this edition).

Because it’s so long, I was kind of worried that it might be the wrong place to start with him, a bit like reading Gravity’s Rainbow before you read The Crying of Lot 49, or The Silmarillion before The Lord of the Rings. Happily, I was wrong.

OK, Plot Synopsis time. Perdido Street Station is set in the city of New Crobuzon, a vast, sprawling metropolis ruled by a ruthless militia with a monopoly on air travel. Think Ankh-Morpork without the olde-worlde charm. Or any charm at all, really. It’s populated not only by humans but by mutants Remade in punishment factories, by crossbreeds and halfbreeds, by strange races from all over Bas-Lag (the world upon which this particular fantasy is set): khepri, insect-headed humanoids; garuda, tall, winged beings with a merciless sense of justice; vodyanoi, toad-like creatures who can sculpt water. Into this city comes Yagharek, a garuda stripped of his wings as punishment for a terrible and unspecified crime. He asks a scientist, Isaac Grimnebulin, for help to fly again; Isaac agrees, but the project has the awful consequence of unleashing a nigh-invincible psychic terror upon the sleeping city (no specifics because SPOILERS, but it’s deeply scary and disturbing). Isaac and his ka-tet – including his khepri lover Lin, radical publisher Derkhan, and criminal broker Lemuel Pigeon – negotiate the treacherous characters, streets, buildings and stations which make up New Crobuzon to defeat this menace before it destroys the city.

This is the bit of the review where I have to organise my thoughts carefully before continuing. See, Perdido Street Station is utterly unlike anything I’ve read before. That is, I keep thinking of comparisons, but each of them is qualified: an adult Edge Chronicles, Terry Pratchett without the humour, Dickens with added magic and violence, Gormenghast but more bleak. And it’s part of the fact that it feels so unprecedented to me, I think, that made this book so damn difficult to read, on several levels.

Here’s the thing: Mieville, as a writer, is simply uncompromising. New Crobuzon is a cut-throat, ruthless world; the violence in this novel is frequent and often graphic, though, happily, it never feels gratuitous. This, one feels, is how the city works. No matter how you try to avoid it, eventually you’re going to have to bash someone on the head or kidnap someone or do something bad, something that will haunt you for the rest of your life. Everyone in this book is trapped in a system which rewards injustice and aggression and crime. The choice is stark: do nothing, or do something bad.

As a consequence of that, the book pulls no punches emotionally, either. There’s no sugar-coating, no rose-tinting, no looking away. It’s a feels rollercoaster, reading this book. It made me laugh, cry, gasp, smile, chew my fingernails, punch the air, grin widely. (Don’t read this on a train unless you want people to think you are strange.) It’s exhausting and exhilarating and terrible and wonderful all at once.

And this is all fine. It’s good, in fact, because the best art makes us uncomfortable. It makes us question why we’re uncomfortable. It moves us, and changes us. And fantasy, good fantasy, is peculiarly suited to that process: it allows us to pick up our conventions, our ideas, and deconstruct them, tear them apart, build them up somewhere new and strange so we can see exactly what they are. This is what Perdido Street Station does very well.

In fact, the best thing about Perdido Street Station is how, well, intellectually robust it is. It can be read purely in terms of story – and it’s a damn good story too – but there’s also a really interesting discussion going on about art, and dreams, and consciousness (is consciousness the same as humanity? is there such a thing as art which is moral? what does it mean to dream?) and about multiculturalism and cultural assimilation and the idea of the melting pot (does it actually exist? how does a new culture cope when it collides with an old one? what happens when different races try to live side by side?). It’s fascinating to read, and to think about, and quite frankly all this could have gone on for another 900 pages without my getting bored, at all.

TL;DR: Perdido Street Station is frickin’ awesome, and I intend to read ALL THE MIEVILLE as soon as humanly possible. Excuse me while I petition my relatives for National Book Token money…

Edit to add: I’ve just discovered that many of the magical races featured in this book are actually real mythical creatures from around the world. This makes me very happy.