“She stood not ten feet from the King of Adarlan. Freedom or death lay at this table. Her past and future were seated on a glass throne.” 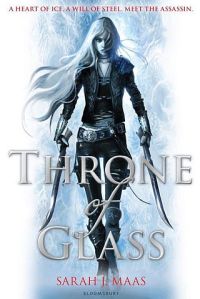 I came across Throne of Glass while looking for fairy tale retellings for my children’s literature course; supposedly, it’s based partly on “Cinderella”, although it doesn’t actually market itself as such. It tells the tale of Calaena Sardothien (she of the Awesome Name), trained assassin and daughter of a kingdom long-fallen to the invading armies of Adarlan. As the book begins, she’s slaving in the notorious labour camp of Endovier, having been caught in her assassinating activities, when she’s offered a choice by Prince Dorian of Adarlan: compete in a thinly-disguised version of the Hunger Games for the chance to become King’s Champion, or die in Endovier.

She chooses the Hunger Games.

(I should probably note that they’re not actually called the Hunger Games, but they might as well be.)

I’m going to go into a little more detail on the Hunger Games plotline, because it’s easily the weakest element to the book. Essentially, twenty-four contestants take a Test a week for thirteen weeks, losing one or more contestants per week to death or just general incompetence, until there are four left after Christmas to have a nice big duel. It’s like The Apprentice but deadly.

Now, I’m sure this is all a lot of fun to write (except Maas doesn’t actually describe most of the Tests in any detail), but it doesn’t make any real-world sense. What is the point of this marvelously convoluted little set-up? Sure, it would make great entertainment, from a medieval point of view, but no-one is watching. For some reason, the whole fandango takes place in the castle of Rifthold, capital of Adarlan, but hardly any of the court seem to have any idea that the contest is happening. It’s not like a joust or a tournament. So what is the point?

Well, as it turns out, the Adarlan Hunger Games are there as a suitably tension-generating plot for Maas to hang her obligatory YA love triangle on.

This is annoying, because there are so many other places for Throne of Glass to go. Calaena, initially, is a fantastically badass heroine, constantly scoping out escape routes, weapon choices, battle tactics, etc. But maybe a quarter of the way into the novel there’s a moment when she finds the perfect escape route and, inexplicably, goes “Nah. Won’t do that. Because reasons.” (Not an actual quote, but you get the picture.) This, I feel, rather peremptorily shuts off that particular plot angle.

And then there’s the rather fascinating magical subplot involving a centuries-old faerie queen and an ancient evil lurking in the castle. But this, too, is dealt with disappointingly perfunctorily, and Maas doesn’t really seem very interested in it. Or in anything, actually, including the Hunger Games plot, apart from whether Calaena will end up with Prince Dorian or her guard Chaol. Given that they seemed pretty much interchangeable, I couldn’t actually bring myself to care. Nor was I particularly interested in Calaena’s unpleasant competitor Cain, or the rebel princess Nehemia, or the magical queen Elena, although the narrative kept telling me I was supposed to be interested.

There were a couple of things I did quite like, though, which keep me from writing off Throne of Glass completely. I enjoyed the little material details of Maas’ sanitised medieval world: its daggers, its trinkets, its buildings, rooms, books, clothes. I enjoyed inhabiting that world, even if I didn’t like what actually happened in it.

And speaking of clothes, I did appreciate that Calaena’s love of pretty gowns and dressing up doesn’t make her weak or vain or silly or unable to stand up for herself, as it often does in other fantasy novels; she likes looking pretty because she likes looking pretty. That’s all. That’s enough. She likes dresses and she likes stabbing people. The two don’t have to be mutually exclusive.

There are aspects of Throne of Glass that are feminist, that are progressive and liberal and different, and I appreciate that the effort has been made. But those aspects and that effort all seem rather superficial, really. Of course, “Cinderella” itself is not particularly progressive and liberal and different, but then Throne of Glass isn’t really a straight adaptation of that fairytale. Maas could have done other things with it. She didn’t. Throne of Glass just feels rather conventional, and rather disappointing.