“Life would be a lot easier if conversations were rewindable and erasable, like videos. Or if you could instruct people to disregard what you just said, like in a courtroom.” 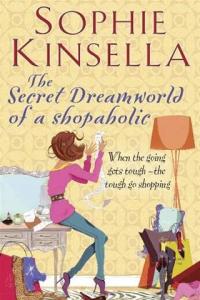 Hello again, Constant Reader! *waves cheerily* As you may have noticed (or not), I’ve been on hiatus recently, partly because my wifi was broken and partly because posting at 2am, great fun as it is, becomes untenable when you have to get up at 8:30 the next day to write about glass slippers and Frozen.

But now we’re heading into Christmas, so I should be back for a good while now. Plus I need a good rant. And there are few things better to rant about than The Secret Dreamworld of a Shopaholic.

Embarrassingly, I’ve actually read it several times before; it was in my school library, and when I was sixteen I thought it was the most hilarious thing ever written. So when my grandmother pointed out that you could get it for £1 in WHSmith with the Daily Mail…well. £1.

Becky Bloomwood, financial journalist, is thousands of pounds in debt because she can’t control her shopping addiction. (Oh, the irony. Har. Har. Har.) Can Becky ever escape from this dream world, find true love, and regain the use of her Switch card?

(That last bit, by the way, is exactly what the blurb says. Even the Switch card bit.)

Apparently sixteen-year-old me was a little less picky than twenty-year-old me, because it’s not quite so funny any more.

Actually, that’s not exactly true. It is funny and it did make me laugh. A bit. More towards the end, it has to be said. But that fails, now, to make up for the fact that Becky is one of the most fundamentally dislikable protagonists I’ve read in a while. She’s a fantasist who lets her imaginings get wildly out of control on an irritatingly regular basis. She’s self-centred, shallow and a compulsive liar who pretends her bank manager is a stalker and dates a guy for his money. Sure, she feels bad about it later – but only because she didn’t get the money she needed to pay off her debts. UGH. You just want to slap her after the first couple of chapters.

To add insult to injury, the book doesn’t even work as a story. Becky manages to clear up her debts and snag the conveniently rich businessman with the Edward Cullen melty eyes with no apparent effort on her part, and certainly no kind of comeuppance for all the stupid things she does over the course of the book. According to Kinsella, it’s perfectly all right to lie, deceive and cheat your way through life so long as you get the TV slot at the end of it. It’s unbelievable. Worse, it’s annoying.

See? This is what studying English for three years does for you. You can’t just enjoy things any more. Sigh.