“Madness is unfortunately not incompatible with government.” 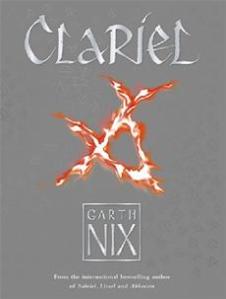 I was ridiculously excited for Clariel almost without realising it. It’s the prequel to Nix’s rather wonderful Old Kingdom trilogy, which features, among other things, strong female protagonists, fast-paced plots and a really interesting magic system involving necromantic bells and raising up the Dead. In short, they were awesome, and still are.

Clariel, though? Less so.

The book, set several hundred years before the action of the Old Kingdom trilogy, follows Clariel, daughter of one of the most skilled goldsmiths in the kingdom, as she and her family move to capital city Belisaere. Clariel resents this move, and wants only to return to the forests of Estwael to become a Borderer. But, of course, Clariel finds herself being drawn into the intrigues and manoeuvrings of a city that looks down upon Charter Magic as servile and increasingly seeks to usurp the power of the dotard king.

I’ll start with what is probably my most personal and therefore least fair criticism, which is simply that it’s not the Old Kingdom trilogy. Clariel isn’t a Charter Mage, so there’s comparatively little Charter Magic here, and what  there is appears to work more or less exactly like electricity. The overall impression of Belisaere, therefore, is one unhappily similar to those annoyingly sanitised medieval fantasies where no-one is ever cold and there’s always enough light at dinner and you can travel sixty miles an hour because MAGIC. There are all these mutterings about discontent among the peasants but, frankly, I was never entirely sure why they were discontented.

There’s no river of Death here either, no great quest, no bells, no Dog or Touchstone, Orannis or Kerrigor or Great Danger; just a slightly eccentric king and a power-hungry goldsmith. It’s more YA political fantasy and it’s rather dull.

My second complaint: Clariel, as a novel, feels chronically disjointed. Essentially, Nix has taken what should have been a few lines of backstory in Abhorsen and expanded it into a five-hundred page book. The result is a novel that not only feels somewhat indulgent – an author’s nostalgic return to a world he doesn’t really inhabit any more – but is also rather unsatisfying, shape-wise. There’s a whole lot of stuff set up at the beginning of the book, in Belisaere, which doesn’t end up being addressed: the people’s rebellion? The failure of the Great Charters? Aziminil’s grand plan? All dismissed with a bit of authorial handwaving: “And Then It Was All Magically Better.”

I do appreciate that Clariel was asexual – an interesting choice for YA – as well as a beserker, but it didn’t stop Nix waving the possibility of a romance in his readers’ faces, which sort of defeats the point somewhat.

On the other hand, the book does see the return of Mogget, the sarcastic Free Magic cat who was such a delight in the original trilogy. I would quite happily read a whole book about Mogget. Heck, I would read a whole trilogy. Mogget gets three stars all on his own.