“There is in a god’s face more of marvel than prediction can tell.” 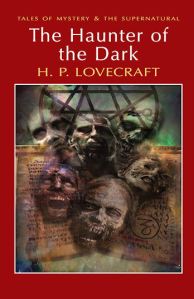 This book is the perfect example of why star ratings for books are stupid.

I guess Lovecraft needs no introduction, but just in case: The Haunter of the Dark is a collection of horror tales of various sorts from an acknowledged master of the genre. My feelings about it are decidedly mixed.

Firstly, I want to say that…okay, wow. Truly, some of the stories in here are absolutely fantastic. Perhaps not stylistically (although I may be damning myself as I say that, since the app I Write Like claims that my style is akin to Lovecraft’s, except when it’s like Tolkien’s), but atmospherically, thematically, whatever-ly, Lovecraft nails something in his dream-cycle stories that I’ve been trying to pin down in my own writing for a long time. Stories like “Polaris” and “The Doom that Came to Sarnath”, set in worlds reachable only in dream or imagination, have real power, catching at the alien without making it familiar; the alien is wonderful, it is beautiful, it is noble, but it is also alien, strange, terrifying. These stories are excellent.

Even some of the more prosaic tales – which is to say, the tales set in small-town America – have a genuine sense of suspense and horror; I really enjoyed the title story, “The Haunter of the Dark”, which sees an impressionable writer becoming obsessed by a ruined old church and the horror from unknown realms which dwells within. Again, the stories – most of them – are good at catching the atmosphere of horror and running with it without entirely deflating it. One or two of the stories (“Herbert West – Reanimator”, I’m looking at you) do feel forced and irritatingly sensational, but this is a big collection; for all of the tales to be perfect would be too much to expect.

I started off enjoying the fact that all of the tales linked up – that dream-cities recurred, that characters cropped up again and again in the tales – but I think reading them all at once as I did isn’t the best way to enjoy this effect, as the terror of that High Priest guy with the yellow silk mask wears off somewhat when you realise he’s just one of those green things with teeth from the Moon. (Yeah, it is as weird as it sounds.) What’s slightly more satisfying is now possessing (like Randolph Carter, I guess) a sort of silver key to a lot of fantasy that came after: Lovecraft is massively influential, and now I’ve read him I can see where Terry Pratchett’s Dungeon Dimensions come from, why The New Albion Guide to Analogue Consciousness is so aggressively abstruse, and why everyone thought I was referring to Batman when I mentioned Arkham.

But Lovecraft’s tales are terribly problematic, even for the period in which he was writing. To put it baldly, Lovecraft is massively racist, sexist, and quite possibly a number of other ists. Basically, if you are not white, male, American, and at least middle-class, you are a monster from Beyond the Dawn of Time, or about to end up being eaten by one. So I’m kind of torn between reading everything he ever wrote ever immediately, and wanting to time travel back to 1930 specifically to punch him in his pimply face. It’s a tricky one, and for me it raises some interesting questions: is The Haunter of the Dark‘s undoubted aesthetic effectiveness enough to outweigh its problems? Is reading Lovecraft any different from reading, say, Orson Scott Card’s novels despite that author’s homophobia (leaving aside royalty issues)? (I ask this because, interestingly enough, nobody ever suggests boycotting Lovecraft because he’s a bigot, whereas everyone wants to boycott Card’s.) Can you excuse bigotry because it was normal in the era in which the bigot grew up?

I’m going to go through the tales in this volume one by one, because I still have issues with some of them that I’d like to raise. Whatever the answers are, though, I probably won’t be reading more Lovecraft any time soon, if only because this book took me a heck of a long time to finish, and I’ve overdosed on Lovecraft for the time being.

The Haunter of the Dark. A little slow to start, but, like I said, a generally enjoyable story about churches and evil things from the dawn of time. A great start to the collection.

Polaris. Probably one of my favourites. A dream-cycle story, it’s really chilling and conjures up this brilliantly alien, wonderful world of imagination.

The Statement of Randolph Carter. One of the weaker stories, it concerns the testimony of a guy who watches another guy go into a catacomb beneath the earth and not come out again. Suspenseful, but a little over-the-top.

The Cats of Ulthar. Actually, this is the story that convinced me to buy the book: I saw the title and was like, “A story about cats. Sold.” And it is indeed a story about cats, which automatically makes it perfect.

Celephais. Another powerful dream-cycle story about the dangers of the imagination, the seductive draw of the unreal. I love that we see the guy return in “The Dream-Quest of Unknown Kadath” as someone who really, really misses Cornwall.

The Other Gods. This one has links to “The Cats of Ulthar”, which is nice (because cats), and is again a great dream-cycle story. Some people go looking for the gods on a mountain in dreamland. I hardly need to tell you that it does not go well.

The Unnamable. I don’t remember what this story was about. It was probably OK.

The Shunned House. Long and not very interesting. It’s just an embellished haunted house narrative with too much family history.

The Horror at Red Hook. In which horror is brought to innocent and clean New York by immigrants from the East. OF COURSE. Made me ragey; but the weird trippy bit at the end is undoubtedly quite good.

The Silver Key. One of Lovecraft’s more famous stories – Paul Shapera did a musical version of it under the name Mochalab (it’s on Bandcamp, search it). I liked it as an ideological manifesto, but not so much as a story.

The Strange High House in the Mist. Oh, this one was great. It’s about a mysterious house on a cliff that everyone thinks is haunted. There’s such a sense of atmosphere here: I kind of wish I lived in Kingsport, and the mixture between wonder and fear is particularly potent in the ending.

The Dream-Quest of Unknown Kadath. Although its length (over 100 pages) means that it can’t really keep up its atmosphere of strangeness and it occasionally descends into farce (I mean, I love cats, but on the Moon? Really?), the places it visits are fascinating, and there is genuine terror here.

The Colour Out of Space. Meh. Gory, and unnecessarily so.

The History of the Necronomicon. I love that Lovecraft literally made up a whole fictional history for his fictional book.

Fungi from Yuggoth. A retelling of “The Silver Key” in verse? Lovecraft’s verse is serviceable but not good; I could have done without this tale.

The Shadow Over Innsmouth. In which fear of the foreigner is thinly disguised as fear of slimy green things with teeth. It’s also not a very interesting story.

The Dreams in the Witch House. Just please go away with your racism, Lovecraft.

The Thing on the Doorstep. In which we get to meet the single major female character in THE ENTIRE COLLECTION and she not only turns out to be ACTUALLY A MAN in a woman’s body but about to steal her fake husband’s body SO SHE CAN HAVE A BETTER BRAIN (because men’s brains are literally better than women’s brains). All of which is hilariously Freudian (empowered women are scary, man!), but also like, whatever, H.P. Just shut up.

The Shadow out of Time. I actually liked this one; I felt the concept was really interesting and the tension well-built.

Supernatural Horror in Literature. A so-called “essay” on weird fiction. Actually just a list of ghost stories, some of which may well be added to my TBR radar. So that’s something.

Edit to add: Oh dear gods, Lovecraft’s birthday is the same as mine…