“It’s easier to say true things in the dark.” 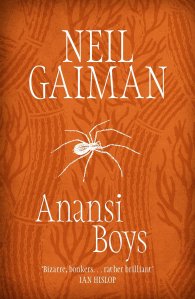 So I have a Chequered History with Neil Gaiman’s books. Stardust and Neverwhere both disappointed me in various degrees, but I enjoyed The Ocean at the End of the Lane and his cat story “The Price”. Anansi Boys I would place somewhere in between.

Fat Charlie, an American with a Caribbean family living in London, hears out of the middle of nowhere that his father is dead. And then that his father was a god. Anansi the spider god, to be precise. And that he has a long-lost brother, Spider, who, as it were, got all the godliness, and proceeds to rock up in Charlie’s life and destroy it. Cue much predictable hilarity and some darkness as Charlie attempts to clean up the mess his father’s death has made.

And if we take just that storyline, Anansi Boys is actually quite a touching story of cultural and familial acceptance, embracing one’s heritage and one’s potential. Charlie grows up, becomes a whole person, god and human and all; the novel is really a humane Bildungsroman, a Western form incorporating a Caribbean folk myth. Which is, you know, interesting and clever and fascinating.

Except that Anansi Boys is the perfect illustration of the fact that “diverse” does not automatically mean “good”. Or even “unproblematic”. I’m about to go all feminist here, just to warn you. Also, SPOILERS.

I really, really disliked the way Gaiman treated the brothers’ love interests. For a start, they are called Rosie and Daisy, which are perfectly good names on their own but together feel like the set-up for a joke. A bad joke. Secondly, they feel like plot devices, not characters: narrative rewards for Our Heroes, ways to signal Charlie and Spider’s entry into personhood and maturity, ways to continue the godly line. Cultural inheritance feels very male here; it’s a book about fathers and sons and brothers, with women as ciphers or as strange and alien Others. Charlie and Daisy’s relationship comes out of nowhere, a way to fulfil the demands of the plot. The Bird Woman’s vengeance on the Anansi bloodline cloaks a male desire for vengeance. Even the death of Charlie’s mother goes nowhere interesting.

But the thing that really got up my nose? Rosie and Spider. Rosie, Charlie’s fiancee, has decided not to sleep with him until they’re married. But when Spider turns up, disguised as Charlie but Super Hot (Charlie, of course, is not Super Hot, because he is Fat Charlie), Rosie rolls quite happily into bed with him. Because Rosie’s decision was made solely because Charlie wasn’t hot enough? Thanks for that, Neil Gaiman. That’s a great message right there.

I really don’t understand why the internet thinks that Neil Gaiman is the Best Writer Ever. Nothing that I’ve read suggests any kind of nuance, any kind of real darkness or strangeness or sophistication in his work. If you’re looking for wild fairytales about stories and monsters in the down deep, you’re much better off with Catherynne Valente’s Fairyland series.