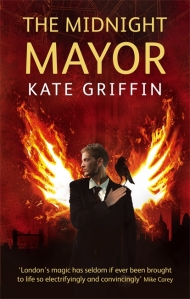 The Midnight Mayor is the sequel to one of my favourite books last year, A Madness of Angels, and while it’s not perhaps as deep or as potent as the first book, it’s still a pretty good read. With the magical wards of London failing – the ravens of the Tower dead, the London Stone broken, the Wall defiled, the fabled Midnight Mayor killed by a thousand paper cuts – Matthew Swift, sorcerer and embodiment of the blue electric angels, I am we and we are he, is forced to work with the Aldermen, a kind of magical bureaucracy, to find out why and how the city is being targeted.

I’ve been thinking about Griffin’s books as a form of urban Gothic. I realise this may seem perverse: the modern magic of electricity and the Underground and the rubbish dumps feels pretty much antithetical to the rotting, isolated ancestral mansion of the traditional Gothic tale (Sarah Waters’ The Little Stranger comes to mind as a modern example of the genre). But, thematically at least, The Midnight Mayor deals with alienation, the feeling of architecture overwhelming the individual, the city being more important than its people.

London is an antheap, Mr Swift. It is a great, sprawling, beautiful nest, built by two thousand years of men, so deep and so dark that its people can never see or know it all, but live their lives rather in this or that complex of the city, burrowing deeper and deeper into their little caves, because to know the full extent of the nest is to realise that you are nothing.

We only have to think of the “ponderous architectural quality” of Mervyn Peake’s Gormenghast to recognise that this is an anxiety that goes right back to the classic Gothic novel: a sense of the past that is too heavy for the present to bear, that breaks down normal forms of communication between individuals. London is itself a character in Griffin’s novels just as Gormenghast is in Peake’s, and it often feels as if the merely human characters are stuck in the city, unable or unwilling to go elsewhere; there is, in fact, a moment in The Midnight Mayor when Swift almost loses himself in the fierce, soul-consuming joy of the urban magic he performs; that is, his individual existence is almost merged into the city’s.

More than that, though, there’s a sense of semantic slippage in these novels that feels fundamentally Gothic; a bagginess, a kind of unspeakability to the edges of the text. At the heart of this is the slide between Matthew’s I and the angels’ we which enacts itself often sentence by sentence, as if there’s really no appropriate human expression for what Matthew is, singular or plural; as if Our Narrator is himself unspeakable:

We dragged in the fire from the live rail, the rushing of the train, the pumping of the cold air in the tunnels, the light, the darkness, the blood, the heat in my stomach that I couldn’t give, the strength in my blood that I didn’t have left, the warmth in Oda’s body clutched to our chest; we dragged in a million million million ghosts who had died to dig the tunnels, who had lived their lives on the train going from here to there and back again, touch in, touch out, ticket, escalator, platform, chair, a million, million, million dead and living things who every day prayed for their train to come for the seat to be free for the paper to be left for the strangers to be kind for the journey to be swift for the ticket to be cheap for the stairs to be empty for the tunnels to be cool for the announcers to be gentle.

Matthew’s self is merged with a part of the city, with urban experience; his first-person narration, the narration that is not I but we, not we but I, seems to say that no inhabitant of the city can be truly singular, truly subjective; always some part of the city observes the city, infects the observer, compromises and alienates the individual. That this specific semantic slide is accompanied by a lyrical, sing-song rush of ragged prose – which I guess some might call overwriting (but then Peake is overwritten, and du Maurier, and Radcliffe) – only heightens the sense of unspeakability, the sense that the city is indescribable, excessive, uncapturable, too vast for any human to take it all in, ceaseless and exhausting.

But what’s most surprising about all this, I think, is that Griffin makes this sense of alienation and impossibility positive: a source of power and a thing to love (which it certainly isn’t in Peake’s work). The novel asks us to rejoice in the massive and miraculous conglomeration of humanity and the things that strangers make possible. As urban dwellers, we rely on strangers to bring food to the shops, to maintain the water pipes and the electricity, to run the buses, to keep the heat on: we are not alienated but connected, “close as lovers”, as Griffin likes to insist.

This goes some way, I think, towards explaining why this series has such a hold on me. Yes, the plots are thin and often holey. Yes, the characterisation is uneven and the narrative infodumpy. But Griffin’s exploitation of the imaginative potential of the city, her exploration of an anxious love for a dirty, smelly, alive place, the unstoppable rush of her prose, with all that lurks around its edges: these are wonderful, true things, and I want to go on reading them.

2 thoughts on “Review: The Midnight Mayor”