“The beauty is that it is comprehensible, even if its shape is unknown.” 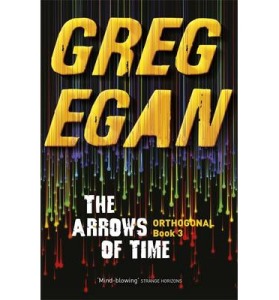 The Arrows of Time, the third and final volume in Greg Egan’s Orthogonal trilogy, sees the generation ship the Peerless at a literal turning point in its history: about to make the 180-degree turn back in the direction of the home world. As in The Eternal Flame, the second book, society on board the Peerless is split over the consequences of this milestone: there are those who consider it their duty to return to the home world and save their ancestors from the Hurtlers, and those who advocate going onwards, away from a destiny laid out for them years before their birth, and away from the uncompromising necessity of a deceleration those aboard the Peerless don’t yet know how to achieve.

This third novel, then, grapples more overtly than the first two volumes with the problem of free will, while making it clear that that’s covertly what the whole trilogy has been about. Or, more precisely and in Egan’s words, it’s about the kind of epiphanic moment an individual experiences when “her will, her actions and the outcome in the world could all be in harmony”, a theme we first encountered at the end of The Clockwork Rocket and which surfaces again here.

Now, this sounds very nice, I’ll grant you, but what does it actually mean? I’m not one hundred per cent convinced that even Egan is quite clear on this point, but it seems evident to me that this is not, exactly, so much a question of free will as a question of self-actualisation; that is, the predicament which many of Egan’s characters face is not so much, “In a deterministic universe, how can I be free to choose my own actions?” as, “In a deterministic universe, how can I be?” How, that is, can I be I, an individual who matters, rather than an unlikely collection of atoms being bounced around by physical and cultural constants over which I have no control? How can I, meaningfully, be in the world?

An example: Ramiro, one of Arrows’ protagonists, struggles with the fact that scientific progress aboard the Peerless allows the construction of a communication system which can bring messages from the future. His fear is that knowing the shape of the future will reduce the individual’s striving to shape their own life to a kind of apathetic acceptance of whatever they know will happen anyway; that, with such a messaging system in place, the individual has no real power to be in the world, to actualise themselves, to act upon the fabric of the universe. Reading back into the trilogy, we can see the same concerns manifesting in response to cultural as well as scientific pressures: Yalda’s despair at the misogyny of her society, Carlo’s misery at the seemingly unchangeable facts of his race’s biology (in the Orthogonal trilogy, women die during childbirth). Yet despite these pressures, Egan’s characters do manage the trick of being, meaningfully, in the world: Yalda’s last act is one that defiantly champions the right of women to sovereignty over their own bodies, and Carlo discovers a way to change hitherto established biological facts. They force their cultural and biological universes to give them a space for self-actualisation, for them to be in the world.

I would argue that in this final volume of the trilogy, Ramiro doesn’t actually have to force this space open; what he requires to self-actualise is simply a paradigm shift. Put simply, what Egan’s characters, as well as his readers, haven’t yet realised is that his apparently deterministic universe does, radically, have a space for them, allowing them to self-actualise, to be more than passive mega-atoms bouncing around a soulless cosmos. When Ramiro and some of his fellow travellers visit Exilio, a far-off planet on which time runs backwards (because of Egan’s physics, which I won’t pretend to understand), Ramiro’s fears that his actions there will be meaningless are mollified; the reality is far more gentle than his nightmare of being locked into pre-destined paths.

Ramiro…watched as Azelio knelt down, a trowel in one hand and the wheat plant in the other. He lowered the plant until its roots were in the hole, then he started adding soil from the surrounding mound. Some of the soil was scooped in with pressure from behind, in the ordinary manner. Some appeared to pursue the trowel, the way the dust sometimes pursued Azelio’s feet.

In other words, the universe appears to make space for these people, taking account of their actions, shaping itself around what they do, instead of forcing them into a locked predestination. Indeed, as it turns out at the end of the novel, the life of the individual is meaningful not in spite of the operation of the universe, but because of it: Agata, one of Ramiro’s fellow travellers, finds that the universe has a particular shape, “and that’s why we exist at all: with a history, with memories, with an arrow of time”. The novel, the trilogy, enacts a paradigm shift from a view of the universe which is random, impartial, savage, unknowable, to one which is supremely knowable, which is accommodating, which has a place for sentience. This paradigm shift enacts in large, in fact, the point which Egan has been making all along with his diagrams and his impenetrable physics: that science and narrative, science and culture, are not mutually exclusive but mutually inclusive. Just as there is a place in science for politics, so there is a place in the operation of the universe for sentience and, by extension, for us.