“You don’t return people’s smiles—it’s perfectly clear to you that people can smile and smile and still be villains.” 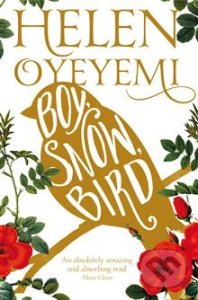 Boy, Snow, Bird begins in 1950s America, with a ratcatcher’s daughter who calls herself Boy. At the age of 20 she runs away from her abusive father, and finds herself in a town called Flax Hill. It’s here she meets Arturo, a man whom she does not quite love, but whose proposal she ends up accepting, partly due to the bond she has formed with his pretty young daughter Snow.

(It’s worth noting that that last paragraph is a very brief summary of the first third of the novel, a heady and enchanting stretch of text which I don’t at all mean to skate over.)

But it’s when Boy gives birth to Arturo’s child that the problems really begin. For Bird, the baby girl, is quite clearly black. Arturo, it turns out, is black, passing for white. Boy, tired of the unfavourable comparisons the people of Flax Hill make between Bird and Snow, who has also been passing for white, sends Snow away to relatives of Arturo’s exiled from his family for not being able to pass.

So: Boy, Snow, Bird is in part a story about race and the toxic effects that what Oyeyemi calls “the worship of whiteness” can have on communities. But it’s also (and, I think, primarily) a story about femininity, with its roots in that quintessential tale of warring femininity, “Snow White”.

Everywhere the novel feels the kiss of fairytale, the leavening unease of world that works absolutely according to narrative logic. Arturo’s proposal to Boy is made not with a ring but a gold bracelet the length of her forearm, shaped to look like a snake. It horrifies Boy, who immediately thinks of wicked stepmothers; but she takes it, and becomes caught simultaneously in the patriarchal trap of marriage to a man she does not love and in the narrative trap of the stepmother; a trap created by worship of whiteness (Snow) and worship of maleness (in some ways, Boy seems to end up with Arturo simply because women are supposed to end up as wives).

This sense of narrative entrapment continues throughout the novel. One of the interesting half-hints of magical realism in Boy, Snow, Bird is the suggestion (never quite confirmed) that Bird and Snow cannot see their reflections in the mirror; or, if they can, those reflections are never quite right.

What does it mean, not to be able to see yourself in the mirror?

Surely it’s a question of representation; the idea that your reality has no place in the world that is constructed beyond your own skull. In “Snow White”, the evil queen’s magic mirror reflects the social construct of female beauty, the concept of “the fairest of them all”. Not being reflected in that mirror, then, is a mark of exclusion – your beauty, which is not fair (though it may pass for it), can’t even enter the contest.

And yet, this exclusion also creates a kind of transgressive power in the narrative. Bird and Snow refuse, together, to play out the feminine rivalry their stepmother has unwittingly set in motion: Bird reaches out to Snow, and although their relationship is not easy, not smooth, they write stories to each other, creating new narratives of femininity, defying the Snow White/stepmother role. Their lack of representation, their failure to appear in mirrors, is as much a threat to white-male-ness as it is a threat to them: the existence of each of the sisters (black daughter of a white mother, white daughter of a black father) destabilises the narratives built around the other.

The end of the novel, accordingly, sees the creation of a kind of female community (specifically excluding Arturo, the main male character of the novel). It’s here that Boy, Snow, Bird makes one, damaging, misstep. It turns out that Boy’s abusive father is actually transgender (although, the novel being set in the 70s by this point, it isn’t phrased this way). But the novel seems to frame his transition as a result of rape, a trauma of femininity, a reaction to patriarchal pressures: if you can’t beat ’em, join ’em. Needless to say, this is an extraordinarily insensitive way to treat transgender issues, reducing the experience of a very real minority to a kind of thematic tie-in, a neat metaphor to tie the end of your novel up with.

It’s the kind of mistake that’s difficult to get past. But I will say that Boy, Snow, Bird is for the most part a powerful, affecting and understated novel, haunted by fairytale, by patriarchy, by racism, and I’ll be looking out for the rest of Oyeyemi’s work.