“What power would Hell have if those here imprisoned were not able to dream of Heaven?” 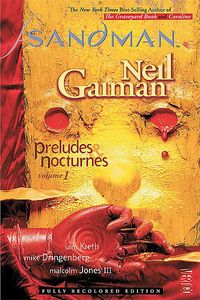 Preludes and Nocturnes is the first volume in Neil Gaiman’s cult horror graphic novel series The Sandman. The series actually began in 1988, which makes it older than me.

At the beginning of the book, the titular Sandman, otherwise known as Dream, or sometimes Morpheus, is captured and imprisoned in a glass orb by a group of occultists. (They were aiming for Death, but got it wrong – a plotline not entirely dissimilar to, say, Terry Pratchett’s Reaper Man.) Inevitably, Dream manages to escape, but only after seventy years of wakefulness. The rest of the first volume shows him taking revenge on his captors (those who are still alive) and regaining his strength, rebuilding the land of Dream and collecting three objects scattered around the universe which will restore him to his power.

I think Preludes and Nocturnes has actually grown on me since I read it. It’s by far my favourite of Gaiman’s works (apart from Good Omens, which is a collaboration with the aforementioned Terry Pratchett): I think his stories really benefit from the visual form, which lends them a depth that his prose never quite reaches.

Which, I suppose, is apposite; because it strikes me that what this volume is really getting at is the problem of narrative control. Dreams are, of course, traditional sites for this kind of discussion: texts as diverse as Chaucer’s Parliament of Fowles and the film The Matrix (which also features a character named Morpheus, of course) create struggles over narrative control that are rooted in anxieties of influence and bodily sovereignty. And in The Sandman we have the rather more obvious fact that Dream is unequivocally an author insert, in the sense that he looks pretty much exactly like Neil Gaiman, who handily informs us in his Afterword of his “desire to write a character I could have a certain amount of sympathy with.” (One suspects that “a certain amount” really means “as large an amount as is humanly possible”.)

So. Motifs of imprisonment, escape, battles for control and storytelling echo through the book: from the story of a woman trapped by Dream’s magical sand, eventually released into “the best of all possible worlds” when Dream gets it back; through the story of Doctor Dee, who has stolen Dream’s amulet and uses it to tyrannise a diner full of innocent people; to the entrance of Dream’s amazingly hot and badass sister Death, who exhorts him to take control of his own “life” (for want of a better word; of course, Dream is immortal). Narrative control is constantly in flux; that vertiginous movement is nicely echoed by the instability of the art, which eschews square panels and (to an extent) clear reading order, veering around the page so that you often encounter moments of uncertainty as to which bit of art comes next in the story.

All this is underpinned by Gaiman’s sound understanding of how a good story works for a Western reader. Things – witches, plot coupons, leaders of Hell – come in threes. There’s an honest-to-god retelling of the fight of Merlin and Morgana from The Sword in the Stone. Cain and Abel make an appearance, Cain forever killing his brother. The DC superheroes wander in. So what looks like narrative chaos on the surface actually has a careful and familiar underlying structure that’s very satisfying: chaos may reign, but the laws of the universe (the universe in this case being Story) remain unchanged.

That makes Preludes and Nocturnes at heart a very conservative text; and it’s here where my key problem with the book lies. There’s a lot of female nudity here, and hardly any male. This is a text in which the first thing our narrator (who we can assume is either Dream or Gaiman himself) notices about a starving woman is that “her nipples are hard and dark and shrunken on breasts like empty pouches”. (Literally, the first thing. Before we even see this woman on the page.)

Just think about that for a minute.

OK. This is also a text in which a male character runs around naked for significant chunks of the book, but the shadows are always really conveniently placed.

Yes, I realise that this was the 1980s, and I have been spoiled by the delightful and irreverent Saga, but, please, get your shit together, Gaiman and co. This kind of thing leaves a really bad taste in my mouth.

I’m hooked, though. Gaiman’s storytelling really works in this format, and I desperately want to see more of Death. Here’s hoping the women get a better deal in later volumes.

2 thoughts on “Review: The Sandman – Preludes and Nocturnes”