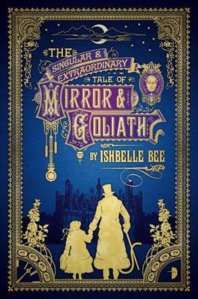 So I feel a little bit spoiled for steampunk after just finishing Angela Carter’s clever, lively piece of Victoriana Nights at the Circus; The Singular and Extraordinary Tale of Mirror and Goliath simply can’t measure up in comparison. It’s clearly gunning for the whimsical-modern-fairytale vibe; I can tell because it compares itself on the back cover to Neil Gaiman and someone called “Catherine Valente”; which, if you are going to compare yourself to a successful and popular author, you should probably spell their name correctly.

Our Protagonist is the titular Mirror, a girl who was shut some years before the novel opens in a grandfather clock by her mad grandfather and left to starve. The policeman who rescued her, Goliath Honey-Flower, who, incidentally, can turn into a bear, and who has developed a paternal relationship with her, is concerned because when Mirror was shut in the clock the soul of an Egyptian princess entered her; so the book opens with the pair’s search for an exorcist, visiting various dodgy spiritualists. The plot only gets weirder from there on out, taking in an evil clockmaker who steals children’s souls; an upper-class and untouchable elite going to nefarious ends to acquire eternal life; and a murderous demon with a penchant for lemon drizzle cake trying to kidnap Mirror and steal the princess’ soul. Oh, and time travel.

So: a modernist fairytale with a steampunk aesthetic. Now, steampunk comes in for a rather large dollop of critical disdain even in SFF circles, mostly from white male critics, as an essentially conservative mode tinged with rose-tinted nostalgia. And this is probably true, to an extent.

But (allowing for the fact that I have only a very limited knowledge of the genre, and that what I am about to elaborate is only a Working Theory of Steampunk) it seems to me that good steampunk is engaged in the work of queering the past; rewriting minorities into a critical narrative that pays attention primarily to the straight white middle-class cis male; creating resistance on the edges of respectability; forcing marginal narratives into an immensely influential era. The punk is just as important, if not more so, as the steam.

Mirror and Goliath is playing all kinds of textual games with its fairytale narrative: fonts get bigger and smaller, bits of old myth and legend (especially the Persephone fable) swirl in and out, fantastical things are passed off as matters of course. The book also pays some attention to madness, so often in Victorian texts a symptom of cultural resistance, of marginality. It’s making all the right moves, looking in the dark corners of Victoriana. It loves its steampunk imagery: the devil in a red silk waistcoat, the penny-dreadful murders, the ruthlessness of the rich and the powerful.

But I couldn’t ever shake the feeling, reading Mirror and Goliath, that all of this was just – surface; an interest in setting and vivid, surreal image for the sake of spectacle. The text never manages to do any heavy conceptual lifting behind its potent stage-Gothickry; and, more importantly, it falls into steampunk’s colonialist trap, with Egypt and its myths deployed to tinge the narrative with the exotic. I’m also uncomfortable with its failure adequately to address Mirror’s childhood trauma – being locked in a grandfather clock, being brought out barely alive, her sisters starved to death in a chest beneath the bed – its insistence on mythologising it into a dark, Tim Burton-esque whimsy that doesn’t, in the end, actually mean anything.

Sound and fury, signifying nothing.