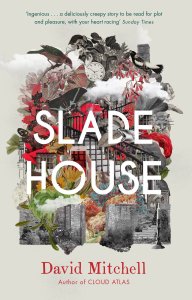 Slade House, David Mitchell’s latest novel, has been marketed reasonably extensively as a Gothic haunted-house novel, which made me quite excited to read it. Having done so, I don’t think this is quite right; it’s too precise, too structurally perfect, to read as proper haunted-house Gothic, which is all about excess.

There is a parallel world in which it could have been Gothic, though. The titular Slade House is an ancestral mansion in an anonymous commuter town that can only be accessed through a black door on Slade Alley. Within dwell the Grayer twins, ominous, shape-shifting creatures who lure unsuspecting victims to the house once every nine years in order to feast on their souls.

As with many novels of its type, it’s much better in the execution than in the description. The novel – or novella, really – contains five sections, each one narrated by one of the Grayer twins’ victims. The first four sections are excellent – Mitchell has a real gift for characterisation, for capturing voices and pinpointing the exact minutiae which evoke a person, with all their hopes and dreams and nightmares. Each one of their stories ends the same way – but they are rendered so vibrantly that this is not repetitive but increasingly, inevitably tragic. And each tragedy is leavened by an achingly tiny bit of hope, as each soul leaves something behind to help the next one get a little closer to escape.

This elegant, poised cascade of story, though, is brought to a thuddingly prosaic halt by the final section, which is narrated by one Iris Marinus-Fenby. Those familiar with Mitchell’s novels will recognise the figure of the Horologist Marinus, one of the rare souls who are reincarnated automatically at death, rather than needing to steal more life from the living. As soon as we hear Marinus’ names we know the Grayers are doomed; which in plot terms is something of a relief, but which squanders the painstaking humanity of the earlier chapters. The fifth section is essentially one long and contrived infodump tying Slade House into the overarching continuity of Mitchell’s other novels.

I don’t have an issue with the fact that the novel’s so explicitly an entry in a series; when he did something similar in The Bone Clocks it was actually quite cool, in an Easter-egg sort of way. But I think there were better ways to do it here, and that this would have been a much more interesting novel if we had had only the Grayer twins sitting at the heart of it like malevolent spiders, with no kindly Horologist riding in to save the day.