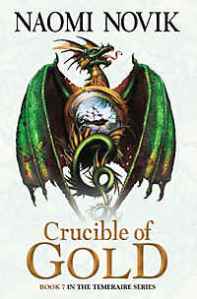 The seventh novel in Naomi Novik’s Temeraire series, Crucible of Gold sees William Laurence recalled to the Aerial Corps for a diplomatic mission to Brazil, where the Tswana, who we met in Empire of Ivory, have taken over a key port city in pursuance of their stated intention to retrieve every Tswana slave. The city being Portuguese territory, and Portugal being central to the latest British plan against Napoleon, it is vital to win it back. Apparently Laurence, despite being generally held in contempt by everyone ever, is best placed to negotiate with the Tswana because he has met them before.

The novel from there is fairly standard Temeraire series stuff: a sea voyage, a long journey by air, a new society with dragons playing a startling and unexpected role, culture clash, gritted-teeth politeness, and a play-off between Laurence’s duty and his morality.

If Novik has any project this far into a series that’s become quite formulaic while generally retaining its delightfulness, it’s telling the stories of people who have been left behind by the “official” narrative of history. So we have the Tswana, rulers of Novik’s Africa, fighting against the slavery inflicted on their nation by the West; we have a captain in the Aerial Corps (Granby) coming out as gay; we have an unmarried female military member, Emily Roland, who is open about the fact that she regularly has sex with a black Tswana Corps captain (Demane). This is all couched in Novik’s propriety-bound Regency prose, in forms of dialogue and social interaction never designed to hold, or allow, any of these things, and observed by straitlaced Regency gentleman Laurence, as close to a cultural default as Novik can get: the radical energies of rebellion tug and swirl around a historical narrative trying desperately to exclude them.

This is also, and connectedly, a story about culture shock. As Laurence and the gang journey into the heart of the South American continent, they stumble across situations which highlight the ridiculousness of the proprieties they, and especially Laurence, still cling to. When an mutinous member of the crew sleeps with a local girl, Laurence offers her money, assuming that her chances at marriage will have been affected; she and her caretaker dragon react with incomprehension. Similarly, when the same crew member, lured by the promise of gold, steals away to live in a local village, Laurence refuses to take what he sees as payment for him from the dragon that protects the village: we can’t sell this man! Why not? the dragon asks, and we do, too, I think: he will only be hanged for mutiny if he stays with the British party, and he is, after all, willing to stay behind. In this strange land, with its radically different culture, the defaults of propriety and morality twist and shimmer and become strange: unable to contain these new realities, they lose their privileged position with regards to dictating “normality”, and become simply another set of strange customs.

None of this is very much different to what the rest of the series is doing; but it does it engagingly and enjoyably, and Novik’s Regency prose really is a joy to read. And it’s exactly the kind of book the world needs right now.