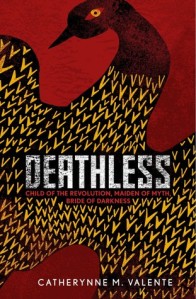 One of my work colleagues asked me what Catherynne Valente’s Deathless was about. (I get this question a lot, and being a fantasy reader, invariably any plot description I give sounds stupid.)

“It’s about the Russian revolution, but with fairytales,” I said, or something similar.

My colleague gave me a look. “That sounds cheerful,” she said, deploying more than a hint of sarcasm.

The novel is a retelling of the Russian fairytale “The Death of Koschei the Deathless”, set, indeed, around the time of the Russian revolution. Once upon a time in St Petersburg, a young girl named Marya Morevna is living in a house that once belonged solely to her parents, but now houses twelve families. One by one she watches her older sisters get married – to birds, as it seems to her – and waits for her own chance to escape the crowded house. Eventually, it’s Koschei, the Tsar of Life waging an endless war on Death, who comes to wed her and take her away. The novel charts her life in Koschei’s brutal, bloodsoaked fairytale land; her role in the war between Life and Death; her relationship with the human world of a changing Russia.

So. Deathless is an odd beast – even taking into account the oddness of the rest of Valente’s work. A couple of weeks ago I read Erin Horakova’s review of the novel in Strange Horizons, and I’ve found it difficult to think beyond her assessment – an assessment I agree with, in part – that the book is structureless, lacking a specific project. As Horakova points out, the novel twists and turns through a number of modes: Bildungsroman fairytale, psychological drama, tale of romance and betrayal, pastoral idyll, road trip. Extracting any coherent meta-narrative, even any particular ideological or moral bent, from this palimpsest is difficult, and probably self-defeating.

I think the key lies at the level of Valente’s prose. Like all of her work, Deathless is written beautifully, in a prose that is lean and savage at the same time, somehow, as being rich with careful alliterations, vital with sensory descriptions; a prose characterised by gnomic, fairytale utterances:

You will always fall in love, and it will always be like having your throat cut, just that fast.

The world built by this prose is bleak and sharp as an icicle, leavened by the occasional flash of faerie magic: the domovoi in Marya’s childhood house trying out Communism; the birds falling from the branch in Marya’s garden to turn into men and marry her sisters; the firebird fleeting through all the interlinked episodes of Marya’s life, always just out of reach of her gun. If we seek for some consistent meaning, some narrative structure that links these flashes into a coherent whole – in short, a fairytale moral – then so does she. At one point she asks a ghost how she can live after the deaths of everyone she knows – deaths occasioned by the fall of Stalingrad, and the victory of Death. She receives the not-entirely-satisfactory answer:

You will live as you live anywhere. With difficulty, and grief.

That is, though Marya inhabits a fairytale space, her life is not a fairytale, and there is no happy ending. In fact, there is no real ending of any kind to make sense of the shape of her life. So the chaotic formlessness of Deathless – or, rather, the way in which Deathless moves through a chain of fairytale structures without allowing them to signify anything – is a sort of analogue of the way life feels to the storytelling ape: countless stories being set up, without revealing any coherent meaning or closure.

The question is: is there a point to this narrative deflation? “It’s like life, d’you see?” is a point writers have been making since at least the early 1900s, and probably well before that.

Probably it comes as no surprise that I think the answer is yes: this isn’t just postmodernism for the sake of it. Avoiding a fairytale moral as Valente does here is one important strategy for evading and undercutting the oppressive structures fairytales were built to serve. As a mermaid-creature, caught in the siege of Stalingrad after seeking a life among humans, observes:

The old order, it is good for the old. A farmer wants his son to be afraid of beautiful women, so that he will not leave home too soon, so he tells a story about how one drowned his brother’s cousin’s friend in a lake, not because he was a pig who deserved to be drowned, but because beautiful women are bad, and also witches. And it doesn’t matter that she didn’t ask to be beautiful, or to be born in a lake, or to live forever, or to not know how men breathe until they stop doing it.

So Deathless is a new kind of fairytale, a not-fairytale, imagined from the point of view of a woman refusing the fairytale roles thrust upon her: obedient child, faithful wife, maker of moral choices, seeker of a static happy ending. (The original fairytale, we note, is not about Marya at all; it’s about Ivan, a man who ignores Marya’s instructions, trespasses on her space, and gets rewarded for it.)

And, to return to the anecdote with which I began this post, it also feels like a corrective of sorts to the West’s view of Russia. Now, I know very little about Russia; my idea of what Russia is like is mainly of the “what everyone knows” variety. In particular, “everyone knows” that Russian literature, and literature about Russia, is dour, bleak, political; we think of Tolstoy and Dostoevsky, of Marx and Lenin. We think of vast epics like War and Peace, espousing wide-ranging political theory and social criticism. (And, just to be clear: I am aware that Valente is not actually a Russian writer. I think, however, that the effect still applies.)

Whereas Deathless‘ formlessness makes it, necessarily, a deeply personal narrative, following a single life against the backdrop of dimly-realised upheavals. It’s a sort of rebuke to the notion that any country ever only has one story to tell: as we’ve seen, Deathless literally has many.

This is not my favourite of Valente’s novels. (Oh Radiance, how do I love thee?) Its using-up of fairytale forms may be interesting, but does not make for particularly compelling reading; there are few reasons for the reader to invest. Nevertheless: it’s the kind of fiction we need right now.