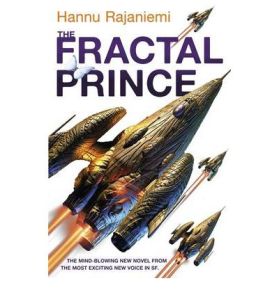 A confession: I have only the dimmest memory of what The Fractal Prince is about. It’s the sequel to Hannu Rajaniemi’s post-Singularity heist novel The Quantum Thief. It’s a take on The Thousand and One Nights set in the last human city, a vaguely Middle Eastern locale that’s threatened by rogue nanobots known as “wildcode” and by the political entity called the Sobornost, which wants to upload every remaining human mind to the purity of digital consciousness. Jean le Flambeur, the thief of the first novel, is involved somewhere. There’s also a human woman called Tawaddud who used to be the lover of a jinn, a human mind trapped inside an object. Oh, and stories are dangerous in this city: telling someone a story can invite the wildcode into their minds, or the jinni.

That’s pretty much all I remember. Impressionistic flashes.

Partly, that’s because Rajaniemi’s prose is incredibly abstruse, eschewing “as you know, Bob”-style explanations in favour of, um, no explanation at all. Given that The Fractal Prince is a novel taking place in a far future in which humans have all but left Earth and all but entirely fused with computers and machine intelligence – there seems, in fact, to be no practical difference between a human mind and a software mind – this makes things tricky. A sample sentence (borrowed from Adam Roberts’ review of the novel in Sibilant Fricative):

The q-bubble struggles to keep up with the barrage it is taking across the electromagnetic spectrum and switches to neutrino tomography around the Bekinstein epicentre.

(Roberts comments, in typical laconic style: “That brings, I confess, no images at all to my mind.”)

Mind, this isn’t a case of authorial incompetence; it’s not the turgid style of, say, the physics sections in Greg Egan’s Orthogonal series. Rajaniemi’s prose is detailed, clever, jewel-faceted – like cyberpunk clockwork, or, better, like a computer circuit-board. You can appreciate the artistry, the minute, interlocking detail, but you suspect that you’ll need a degree in advanced computer science actually to understand it.

Nevertheless, I would recommend these novels, with a few caveats. (As Tori Truslow points out in her review for Strange Horizons, the use of Orientalist imagery in The Fractal Prince is potentially exoticising. And the sub-plot detailing Mieli’s past romance with a woman, a romance which informs her actions in The Quantum Thief, verges on queer tragedy.) They attempt to narrate a future that’s genuinely radically different from now, and which is not entirely, or even mostly, pessimistic – which is an important thing for SF to do. They are ambitious and unusual and they do something new in a highly saturated field. I’m not sure if I’ll read the last book in the trilogy (if I had a pound for every time I’d said that I would have…a lot of pounds), but I’ll definitely remember the ones I did read. In impressionistic flashes.