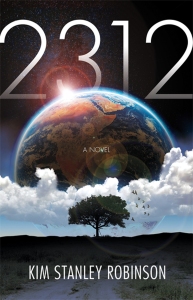 Kim Stanley Robinson’s 2312 surprised me. At first glance, I expected it to be the hardest of hard SF – which it is, sort of. Only it’s actually decently written.

Set 300 years in the future (surprisingly enough), it’s Solar System space opera – see also Stephen Baxter’s Proxima and novels of that ilk. It’s broad and ambitious enough in scope that describing its plot in a way that represents the novel fairly is somewhat difficult. It begins with a death: that of Alex, a woman enmeshed in the political life of the city of Terminator, which travels ceaselessly along metal tracks on the surface of Mercury, constantly outrunning the deadly sun.

Shortly after the death, Alex’s stepdaughter, Swan Er Hong, finds out that her stepmother was involved with a secret, select group of people with shared concerns about qubes – quantum computers which have reached an advanced stage of development, bordering perhaps on artificial intelligence. And then Terminator’s all-important tracks are hit by a meteor, halting the city and condemning it to melting in Mercury’s burning sunlight. How could the tracks’ defence systems have missed such a large body from space?

The novel is a loose, leisurely exploration of these mysteries, taking its protagonists – Swan herself as well as a diplomat called Wahram – on a tour of the populated Solar System. It takes in the fraught politics of this expanded human sphere, looking at attitudes to the terraforming of Venus, the rewilding of an ecologically devastated Earth, the adaptations spacefaring humans have made to their bodies in the pursuit of longevity or just excitement (more on this later), different kinds of artistic expression in this future world. The Solar System of 2312 feels just as complex and politically charged as our own Earth does today; it feels, in other words, utterly human, its rough edges unsmoothed by artistic conveniences. If nothing else, it’s a virtuoso piece of worldbuilding.

It’s a lot of other things, of course. I feel it’s important to say this before I launch into full-on Analysis Mode: 2312 is technically a very good book! Robinson’s prose isn’t particularly memorable, but it’s a cut (or even two) above the workmanlike prose of, say, Stephen Baxter. He has moments of real insight:

She often felt a nostalgia for the present, aware that her life was passing by faster than she could properly take it in. She lived it, she felt it; she had given nothing to age, she still wanted everything; but she could not make it whole or coherent.

There’s even a romance – and it’s that rare thing in genre fiction, a romance that feels sane and healthy and actually like the complicated, ambiguous romances real people have. Robinson’s characters feel real, contradictory and yet essential. This is good writing!

I want to talk about some of Robinson’s structural choices – not necessarily because I think they were the wrong choices, but because I think discussing them potentially gives us an awareness of the boundaries of this kind of story.
Specifically: there’s something a little deflating about the common space opera trope used here that says that the only way to take drastic, species-saving action is to do it in secret; for need-to-know circles of shadowy semi-officials (such as Alex’s qube working group) to hoard up information and then act on it suddenly and unilaterally, without telling anyone beforehand. It’s a trope that reveals deep pessimism about the power of democracy, transparency, diplomacy.

It’s also, as a trope, connected to a deeper structural flaw in the novel, which is probably unavoidable given the kind of story it’s trying to tell: it’s a narrative that centres power. Spacefarers like Swan and Wahram, we’re told, are affluent and privileged, resented back on Earth for precisely that reason. The result of centring their stories is that Robinson’s imagined human future looks, if not exactly utopian, certainly not hopeless. And yet, we’re told that things are very different for those left behind on Earth, working to provide food for those above. It’s a heavily exploitative relationship; I think Robinson does, partially, acknowledge that, but he also has his privileged spacefarers ignore the actual opinions of Earth’s working class in favour of a notional greater good. Which, as Abigail Nussbaum implies, has certain similarities with how Western nations today provide aid to developing countries.

I also feel a bit iffy about the gender politics here. Generally, these are more OK than in most SF: a certain amount of gender fluidity is very much the norm, certainly among the spacefarers, as hormonal treatments in the womb are used to make babies hermaphroditic and therefore longer-lived (I think this is actually based on real science, too). So gender identity is fluid and not particularly associated with what genitalia the characters happen to have. There’s at least one character whose pronoun changes according to who they’re speaking to.

I’m ambivalent, though, about Robinson’s use of the term “bisexual” to describe sexual characteristics – i.e., having both breasts and a penis – instead of a sexual orientation; bisexual people in the real world are already invisible enough without our identity being co-opted for something else.

I want to say this again (as if I haven’t said it enough!): I enjoyed 2312 much more thoroughly than I expected to, and I’ll definitely be reading more of Robinson’s work. Flawed as it is, it’s the kind of book that opens up much-needed questions about our place in this vast and strange universe, and much-needed critical approaches to the genre.