Mrs Loontwill…burst into the room. Only to find her daughter entwined on the couch with Lord Maccon, Earl of Woolsey, behind a table decorated with the carcasses of three dead chickens. 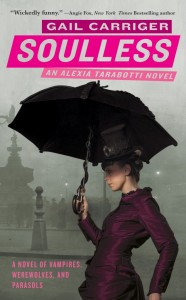 Which is Soulless in a sentence. And it is glorious.

Some context: Soulless is the first novel in Gail Carriger’s Parasol Protectorate series, an immensely satisfying confection of steampunk, paranormal romance and British wit. (Which is particularly remarkable given the fact that Carriger’s actually American.) When a lone vampire is found murdered in a library (totally not stabbed with a sharp parasol, no not at all), Alexia Tarabotti, confirmed spinster with an unfashionably Italian complexion and decidedly unbiddable demeanour, becomes drawn into the investigation, alongside the ruggedly handsome werewolf alpha Lord Maccon.

High jinks ensue, as they inevitably do in these situations, helped along by the fact that Alexia has no soul, and can thus turn vampires and werewolves temporarily human while she’s touching them.

The best thing about Soulless is that it is completely aware of how utterly ridiculous its premise and its plot are. It knows that no actual Victorian gentlewoman would ever be allowed to get herself into half the compromising situations Alexia finds herself in (let’s just say that there’s a lot of entwining). It also knows that letting Victorian women do what they would never have done is part of what steampunk’s for: it is wish fulfilment, and also an exploitation of a historical moment (Soulless is set in an alternative 1873) when femininity was on the cusp of becoming something new. It’s partly that tension, between tradition, etiquette, the trappings of wealth (Soulless is obsessed, again in a gloriously knowing, over-the-top way, with stuff: colourful Victorian costumes – many of them worn by the gay vampire Lord Akeldama – mouthwatering cakes, carriages and carpets and those devoured chickens), and social progress, the boldness of youth, that draws us back to steampunk, I think. It’s a space in which the future is both full of potential and bounded in very specific ways, and that’s an interesting site to explore.

Of course, because it is steampunk, and a romance, its progressiveness is limited. It centres privilege: Alexia may have been passed over for a husband, and her mother and stepfather may not be loving parents exactly, but they hardly deprive their daughter. Delightful as the novel’s interest in manners is – Alexia is more likely to spike a piece of cake with her fork than drive a stake into a vampire’s heart – it’s also symptomatic of steampunk’s central flaw: its conviction that, to put it flippantly, etiquette and breeding make the world more shiny. Adam Roberts explains it better than I do (in his review of Aurorarama, printed in Sibilant Fricative):

…the ground of [steampunk’s] appeal is a sense that the modern world is lacking in refinement. What steampunk tells us is that there’s nothing to prevent the marriage of contemporary technological convenience with the elegance and good manners of the 19th century. shorthand for this, of course, is breeding, and to think of it like that is to understand the extent to which steampunk is embroiled in reactionary ideologies of class superiority.

And: Alexia is headstrong, intelligent, pragmatic and active – in other words, a female character who’s allowed to be as complex as her male counterparts – but she does also end up married. Her revolutionary potential, her infinitely-horizoned future, is tamed, redirected into heterosexual romance. It is, undoubtedly, a particularly satisfying romance, and a better match than a lot of female characters get – I don’t want to downplay that at all – but it does still represent a closing-down, a narrowing of horizons. This is not a novel that has solutions for other women like Alexia, or indeed for lower-class women.

But that’s not what Soulless is aiming for, after all: it’s aiming for affectionate parody, for lovely romance, for a bold female character who knows what she wants, for a swift plot with vampires and werewolves and insults and cake.

So: take it as it is, and it is glorious.

I’ve asked for the sequel for Christmas.