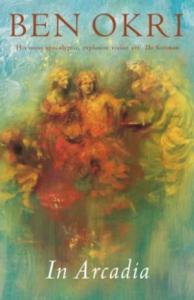 In Arcadia is my second Ben Okri: I read Starbook in the spring last year, having ventured into the perilous mazes of my local library’s General Fiction section because of the utter dearth of SFF by writers of colour. I enjoyed Starbook; it was one of my top ten novels of 2017, in fact. And so, here we are.

It turns out, inevitably, that Okri wrote In Arcadia before he wrote Starbook, because the laws of the universe do not permit me to be anything like an organised and competent reviewer. What it is, primarily, is a meditation on the literary idea of Arcadia: a group of media misfits, the very dregs of the film industry, are brought together by a mysterious figure and sent off across Europe to make a documentary exploring Arcadia, what it means, what it can tell us about modern life, and how we can each find our own Arcadia.

Formal matters first: the novel begins with the bad-tempered and occasionally male-gaze-y free indirect discourse of Lao, the presenter of the documentary, as Our Heroes (for want of a better word) receive their instructions, gather raggedly at St Pancras station, and, finally, travel through the Channel Tunnel by way of the Eurostar. His voice peters out halfway through the novel, to be replaced by omniscient narration; both this and Lao’s sections are punctuated by reveries, or “intimations”, passages written in the almost painfully naïve style that characterises Starbook, musing on humanity’s modern dissociation from nature and the universe:

All I can say for sure is that there is a mysterious real that separates the living from the others…the dead are not dead, they are just not alive in bodies.

This is very Not My Thing; I’m a reader of SFF, a literature whose central mode is irony, and I find whole-hearted, undiluted sincerity of this type hard to take seriously. It works in Starbook because the sincerity, and the apparent simplicity, of the narrative voice is undercut by our own knowledge of the slave trade and of the characters’ likely futures. In other words, the sincere becomes ironic, and vice versa; Starbook is a deeply layered novel, which is what makes it so fascinating. In Arcadia…is not. Those “intimations”, though lovingly written, aren’t made to work in the wider context of the novel.

The novel’s at its best, actually, when it’s functioning as a sort of literary criticism. Early on, Okri defines Arcadia thus:

A place of dreaming, and songs, an oasis, a refuge from the corrupting cities, a semi-ideal landscape, a qualified paradise. A place with the quietly troubling presence of death, and exile, and stony mountains, and suicide, and sinister shadows, a place that cannot be dwelt in forever. Then, with the passing of the centuries…[i]t became transformed into a terrain of the mind, a terrestrial paradise, a place of tranquillity and rural calm, the domain of the yearning spirit.

“A qualified paradise”: not a utopia, not a heaven, but a kind of primordial Fairyland where everything is more fully itself (looking at those “corrupting cities”, we might say: purer) – the shadows more shadowy, the songs more harmonious, life in general more fulfilling.

Okri also reminds us of, by having his characters visit, Poussin’s painting “Et in Arcadia ego” – a pastoral scene in which three shepherds look at a tomb inscribed with that Latin motto, which means “I also am in Arcadia”. (But who? The dead person who presumably occupies the tomb? Death itself? The shepherds?)

The concept of Arcadia is useful to Okri because of its associations with unspoilt wilderness, with nature, with an (ideologically suspect) ideal of a primordial existence when humans were in touch with the world and everything in it. (There’s some evidence to suggest that, on the contrary, humans may have caused mammal extinctions as far back as fifty thousand years ago.) The idea of a disconnection with the universe is a theme of Starbook, too. But the presence of death in Arcadia – the tomb, the “sinister shadows” – in a place that is “the domain of the yearning spirit”, suggests that what we have lost is not innocence, precisely, but – what? Meaning, perhaps: the “intimations” of In Arcadia are juxtaposed with Lao’s low-key misanthropy and the general aimlessness of the rest of the crew, their exhaustion with their work producing the empty documentary signifiers of modernity. The search for Arcadia in Okri’s novel becomes a search for a place in the universe; more, for a place that signifies, a place that matters. The novel ends inconclusively, just after the crew’s encounter with Poussin’s painting in the Louvre – because actually finding one’s Arcadia, whatever it may happen to be, is less important than the act of searching for it. Searching for Arcadia, in earnest, means accepting the possibility that meaning exists and can still be found.

A possible criticism of In Arcadia: like a lot of litfic, it centres individual fulfilment. Certainly there’s not much in the novel by way of interpersonal relationships, or mutual support. And, in a time of social atomisation, unstoppable climate catastrophe and rising intolerance, the search for a purely personal, abstruse kind of fulfilment seems a little self-indulgent, in all honesty. Which is one of the reasons, I suspect, why In Arcadia didn’t work for me: I want my fiction to engage with political and social realities, not hide from them in suspect paradises. Probably that makes me something of a philistine, but there’s honestly not a lot I can do about being bored by navel-gazing.