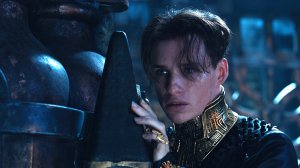 Here are some people who act in the Wachowskis’ most recent film Jupiter Ascending: Mila Kunis, star of sweary comedies Ted and Bad Moms, and voice actor on Family Guy; Channing Tatum, rom-com lead and general provider of eye candy for the straight female gaze; Eddie Redmayne, Serious British Actor (gratuitous picture of whom on the left, because LOOK AT HIM); Tuppence Middleton, vaguely familiar from practically every recent BBC period drama; Sean Bean, whose acknowledged career role is to die in gritty fantasy epics; and (briefly) Victoria Yeates of Call the Midwife.

I mention this because it seems to me that eclecticism, excess, sheer random thrown-together-ness, is one of Jupiter Ascending‘s key artistic strategies, and the main reason why it’s so much fun despite being by most critical standards a pretty bad film. These are actors who, we feel, don’t quite all belong in the same film together. So we can’t quite work out what kind of film this is trying to be. In other words, it’s a film that resists straightforward interpretation. It’s deliberately, gleefully difficult to “read” coherently.

Our Heroine is the eponymous Jupiter, the daughter of Eastern European political refugees who have ended up cleaning the houses of rich Americans. Once upon a time, she finds out that she’s related (by means of some genetic handwavery) to an unimaginably rich space dynasty whose three scions are hunting her for various political reasons of their own.

The world beyond Earth that Jupiter Ascending launches us into is gorgeous: baroque, lush, Gothically excessive, full of impossibly attractive 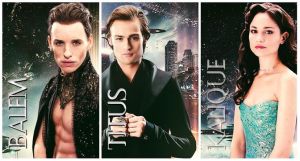 people. (Let’s have another gratuitous shot of Jupiter’s space siblings, played by Redmayne, Middleton and Douglas Booth. Unpleasant to look at they are not. That there appears to be no publicity shot of all of them in the same picture is a great loss to humanity.) It has intricate, rococo spaceships that have absolutely nothing to do with either the sleek modernity of the USS Enterprise or the beaten-up utilitarianism of the Millennium Falcon; it has labyrinthine, Douglas Adams-ian bureaucracies navigated by neurotic AIs with uncanny-valley faces; it has space bees and dragons and wolf-human hybrids with wings.

It’s true that the Wachowskis’ world-building strategy for Jupiter Ascending seems essentially to have been “let’s throw everything at the wall and see what sticks”. It’s also true that the very randomness this creates makes the world-beyond-Earth feel vaster and richer and deeper and realer in its unreadability than many of the worlds in technically more competent SFF films and novels. Because the real world is like that too: however much we think we have a handle on it, however much we try to control it, it is always and forever random and unreadable, stranger and more magical than we can quite imagine.

But it’s this very richness that makes the film’s ending such a problem: having been variously wooed, tricked and attacked by her three space siblings, Jupiter turns her back on this overabundance of meaning, this wonderful, magical world she’s only just scratched the surface of. She goes home, to quotidian old Earth, to her cleaning job and her annoying family. She starts dating the conventionally handsome human-wolf hybrid with the fuck-off massive wings. (Take your mind out of the sewer, please.) It’s all rather monstrously anticlimactic.

Another problem is what feels like a mismatch between what the film says and what it does. See, Jupiter Ascending uses a metaphor for late capitalism that’s so overt that it’s not really even a metaphor: the wealth of Jupiter’s space siblings, their perpetual youth, and by extension all of the beautiful things to be found in the film’s SFnal world, is founded on literal human lives: planets like Earth are harvested, and their human inhabitants turned into an elixir of life. (Jupiter’s political capital comes from the fact that she essentially owns Earth.) Do you see? how it’s like real life? in that our consumerist society is built on the backs of the poor?

But the film so obviously loves its camp, glittering world and its excesses – even after The Truth is revealed – that it’s very, very hard to read it as negative in the film’s own frame of reference, as a wasteful and exploitative dystopia. Which is also, perhaps, like the real world: we all know that we are variously complicit in late capitalism, as workers and consumers, but we find it hard to resist its glittering, comfortable excesses. And, after all, nothing is ever just one thing or the other. The world is not so easy to read as all that.

And, after all, Jupiter does not reject everything about the world she has found. The final scene of the film is her and Space Wolf Boy flying around the skies of Chicago, she in jetpack boots, he (it bears repeating) on actual wings. In other words, she takes some of the playfulness and the anarchy of the world-beyond-Earth back with her.

What does she reject, then? She rejects the Cinderella, rags-to-riches narrative that we expect to fire her into wealth and prosperity for the rest of her days – because that’s fundamentally a capitalist narrative, a fantasy built on exploitation, like the world of her space siblings. She rejects the complicity with exploitation that would be implicit in her continuing to participate in the world-beyond-Earth, in her taking up her rightful place as space royalty. She rejects the very notion of space royalty, of having unimaginable wealth while others suffer and die. There’s something radical in that, in the film’s willingness to upset our generic expectations, confound our interpretive strategies, and derail its own narrative momentum. It’s slightly Mievillean, perhaps.

Of course, even this reading throws up problems. Most notably, it elides the fact that there are capitalist forces at work on Earth too, and that as worker and consumer Jupiter will continue to be complicit in these forces (granting that she and her family are more disadvantaged than advantaged by capitalism). It also conveniently forgets that Jupiter still owns Earth, by the lights of space society. She is privileged by space capitalism, and it’s her very privilege that allows her to reject it – which of course problematises her rejection.

(It is, however, difficult to see how she could reject it utterly, capitalism being all-encompassing and all-devouring.)

Jupiter Ascending is a film that doesn’t work. That’s true. But nothing is ever just one thing, and Jupiter Ascending is also ambitious, gloriously decadent, and rich in its conception of reality. And it contains Eddie Redmayne. I’m not sure there’s much more I could ask for.