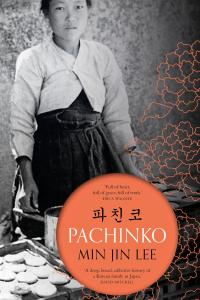 Pachinko was one of the contenders in the Tournament of Books this year, which is really why I picked it up: a sprawling multigenerational historical epic seemed kind of My Thing, or at least more My Thing than much of what goes into the TOB. And it’s reading back through the discussions about it that has really helped me to pull together my thinking. The TOB’s a fantastic idea and I just wish there was an SFF version of it.

In any case: Min Jin Lee’s second novel begins in the mid-1910s with Sunja, the daughter of Korean peasants who run a boarding-house for fishermen. Sunja’s seduced by a Japanese-Korean gangster and left pregnant; her options as an unmarried woman are few, until a gentleman called Baek Isak rocks up at the boarding-house and offers to marry Sunja and claim the child as his.

Sunja accepts, for the sake of her child and her mother, and she and Isak move to Osaka, Japan, to live with his brother Yoseb and Yoseb’s wife Kyunghee. From there the novel unfolds their lives and the lives of their children, grandchildren and various members of their extended family, as they struggle against Japanese hostility to Korean immigrants and the collapsing horizon of possibility that hostility represents for them.

One of the things that really jumped out at me about Pachinko is its interest in food and rituals around food: from the white rice Sunja’s mother buys at an extortionate price to celebrate her daughter’s wedding to the kimchi business Sunja and Kyunghee build to pay their sons’ school fees. Now, I’d be the first to admit that I am extremely food-oriented; but I also think there is something substantial going on here to do with work, and particularly women’s work. Pachinko‘s in part a novel about the emotional and physical labour women do to support their families, keep them together, give them prospects, give them a future – often while sacrificing their own happiness. “A woman’s lot is to suffer,” Sunja’s mother says as she waves her daughter off to Japan.

There are, I think, two parallel threads to this discussion of work. The first is Lee’s stated ambition to represent the lives of “very ordinary people”. Lots of the TOB discussion focused on Pachinko‘s prose, which some found workaday and flat and others found clear and lucid. I fall into the latter camp, I think; the straightforward prose is a way of respecting the ordinariness of her characters, who have little room in their lives for ornament; there’s a sense in which using self-consciously “literary” prose would mean romanticising these lives of hard work and suffering, rather than showing them for what they are.

Secondly, I want to think for a minute about Pachinko as a feminist novel, and specifically about how it treats toxic masculinity. A few weeks ago I threw up my hands in despair at how litfic treats toxic masculinity; how bored I am with grappling with my own rage at privileged male narrators for whom women are a route to psychological healing; how I often feel like I have to set my feminism aside to “appreciate” these novels properly. Well: here in Pachinko is how you deal with toxic masculinity while recognising the full, flawed humanity of everyone involved. And, surprise surprise, it means giving us the perspective of the women as well as of the men.

See, Yoseb has a thing about women working for money, or doing anything that involves money. Early in the novel, Sunja and Kyunghee find out that he’s taken on an enormous debt from a loan shark in order to fund Sunja and Isak’s passage to Osaka. Sunja sells a valuable gold watch given to her by the gangster who fathered her child in order to repay the debt; when Yoseb finds out, he becomes angry, despite the fact that he’d never have been able to pay the debt himself, because he doesn’t want his neighbours thinking that he can’t provide for his household. Similarly, he has a hard time letting Sunja and Kyunghee setting up their food business, despite the fact they need the money desperately. All of this is rendered with empathy and understanding on Lee’s part; we understand why Yoseb feels this way, and we understand that it’s partly a result of the pressures he’s under as a man and as a Korean. But we also understand that his behaviour is harmful, that it makes the women who take care of him unhappy and frightened. The whole novel is characterised by this generosity of spirit: we are encouraged to see every character as human, with their own desires and hopes and reasons for doing things. We might not agree with their actions, but we understand them, and the desperation from which they all stem.

Another common criticism of Pachinko is that it accelerates towards its end: while the early parts of the novel are leisurely, luxuriating in the details of place and space and the emotional lives of its characters, towards the end crucial emotional developments are summarised, compressed into a few pages, as the novel’s cast expands outwards. I think this, too, is deliberate; I want to read this effect as a manifestation of the novel’s bitter, bleak first line:

History has failed us, but no matter.

If Pachinko is a novel about work, then it’s a novel about how even the tremendous emotional labour of people like Sunja and Kyunghee, whose lives are all work, cannot overcome the forces of discrimination and geopolitics and sheer terrible chance (as symbolised by the inability of the family to escape the pachinko business – pachinko is a species of pinball played in parlours in Japan. Apparently 80% of pachinko parlours are owned by ethnic Koreans). What we are seeing in the novel’s acceleration is the doors of possibility slamming shut, the future becoming the (our) present, solidifying into a moment still defined by racism. It is the inertia of fate overcoming individual striving. If we understand “history” as the great purposeful story of humanity, then history has failed these characters because none of their purposes amount to anything, because fate has taken no account of their will in the world. History, the story of people, has denied them their personhood.

That all sounds bleak; and it is. But I don’t remember Pachinko as a particularly bleak book. I think that’s partly because of the extraordinary love we see from Sunja, Kyunghee and Sunja’s mother for their relatives; and because of Lee’s extraordinary love for her characters. In recognising each other’s personhood – especially the personhood of these particular people, living in a culture and a historical moment that Western history rarely takes account of – perhaps we undo some of history’s wrongs. Perhaps, where history has failed us, our empathy can sustain us.