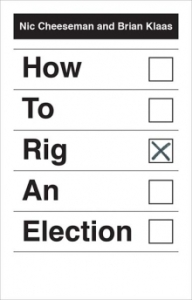 Brian Klaas and Nic Cheeseman’s How to Rig an Election is not a memorable book. That’s a feature rather than a bug, though, I think; it’s a function of the fact that its conclusions are less headline-splashy, more nuanced and detailed, than its sensational self-help packaging suggests. In other words, it turns out that election rigging is a more complex and subtle business than it sounds, and that accordingly there is no one single panacea that can prevent it.

The book’s six chapters each focus on a different election-rigging method: gerrymandering, vote buying, repression, hacking, ballot-box stuffing and playing the international community. There’s an explanation of how each method works, complete with historical and contemporary examples from around the world, and also a discussion of their pros and cons. A final chapter advances the authors’ core argument that authoritarian governments tend to use multiple tactics from this “toolbox”, depending on what they think they can get away with. And an epilogue lays out the necessarily corollary: that if authoritarian governments use multiple tactics to rig elections, then pro-democracy groups must use multiple tactics to combat it.

Why bother with elections at all? Because they lend governments false legitimacy, and give countries access to vital international aid. The book takes the stance that a government’s or a leader’s decision to rig an election is always a careful calculation, balancing multiple factors like international reputation, internal stability, how likely their deception is to be detected and how much they have to lose. The authors make it clear that international governments are implicated in the prevalence of election rigging around the globe: they are much less likely to punish election rigging if it’s not in their economic interests to do so.

I’m not a politics expert, obviously, so the book felt pitched at about the right level: rigorous enough to be convincing, but not so abstruse it was impossible to follow. Perhaps its methodology becomes a little repetitive – each chapter is structured in exactly the same way, and as I reached the end of the book it began to feel formulaic. But: it does the job. This is not meant to be high literature, after all.

If I have one quibble, it’s that the book is steeped in neoliberal orthodoxy. It cites a good economy as a key benefit of democracy. And I would have liked for it to have gone further in confronting the ghosts of colonialism, given that many of the book’s examples come from countries that were once colonies; I’d have liked it to address how Western countries’ advocacy of democracy might be complicated by the legacy of imperialism. I suspect that questioning these things was really beyond the scope of this book; I mention them only by way of noting that it does not come from a politically neutral place.

That doesn’t make it a bad book, of course. I like the nuance of its conclusions and its refusal to present us with easy answers: despite its hot-button topicality, it’s not afraid of complexity and it doesn’t talk down to its readers. It’s maybe not as light a read as its cover suggests, but, after all, that’s not the authors’ fault.