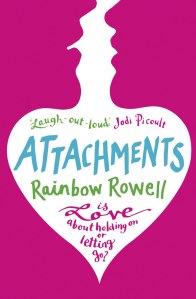 The premise of Rainbow Rowell’s Attachments is not, on the face of it, promising. Our Hero is Lincoln, an IT guy who’s hired by a tech-shy company to monitor their recently-introduced email system and make sure no-one’s having too much fun at work. Only, when he stumbles across an email chain between best friends Beth and Jennifer which definitely breaks most of the rules, he doesn’t report them.

Instead, he just keeps reading their private correspondence. And, you guessed it, starts to fall for Beth, who’s having a rough time with her boyfriend.

Will he ever win the heart of his One True Love?

I’ll talk more about how Rowell handles the inherent creepiness of this premise a bit later. Before that: I think there’s a couple of interesting things going on here that helped me, if not overlook it entirely, at least not fling the book across the room screaming.

For a start, Rowell’s choice to centre a male protagonist – and not an idealised one either – in a novel that’s squarely aimed at the chick-lit market. It’s true that Lincoln is a passive observer for at least a good half of Attachments: mainly what he does is read emails. That’s a clever decision on Rowell’s part: their discussions are full of scurrilous gossip and action, details of their emotional lives and their histories; as such, they keep the novel moving while allowing Lincoln the passivity he needs to make the story work. Because after the half-way point it becomes clear that Lincoln’s actually undergoing the kind of character arc usually given to female characters in romance/chick-lit. Having been unceremoniously dumped by his high-school sweetheart a few years ago, he’s become emotionally stuck, living with his mother and apparently not having much of a social life. Over the course of the novel, he – unfreezes: makes friends with his colleagues in the underbelly of corporate life (cleaners and other IT guys, it seems); finds an apartment of his own; moves on from his ex.

While on one level I like that all of this takes place seemingly independently of his romantic interest in Beth – as in, it’s not a ploy to win her heart or any of that Nice Guy bullshit – I think that’s also the central flaw of the novel. Rowell recognises that what Lincoln has been doing to Beth is really creepy: she has Lincoln quit his job and write an apology to her. And, later on, when he spots Beth in the cinema, he gets up to leave so she doesn’t have to feel uncomfortable in his presence, which I thought a really lovely touch and a great way of showing that Lincoln’s genuinely sorry for what he’s done.

But. The fact remains that the entire book hangs on Lincoln falling in love with Beth by reading her emails. And that he still ends up with her, via that old romantic chestnut, “I Shouldn’t Fancy You, But I Do”. As far as I remember, there’s no other function to those emails: this isn’t a novel that’s interested in the dangers of corporate surveillance, for example, or the compromises we make on privacy in order to enjoy the convenience of social media.

It’s not really that kind of novel, of course. Bu-ut, it seems disingenuous to call your meet-cute out as problematic without addressing it structurally.

That’s my general impression of Attachments: it doesn’t quite…hang together. There’s no causative link between Beth and Lincoln (apart from the fact that she fancies him without knowing who he is, for Narrative Tension), which makes me suspect that Rowell has nothing to say.

It’s her first novel, though, so I guess there are worse mistakes to make. And I still found Attachments both fluffily heartwarming and grounded in a way that’s unusual for me: I tend to react badly to het romances. It helps that both Lincoln and Beth have romantic histories that they need to move past, and that yet remain valid formative experiences: that’s something we don’t see enough of in fictional romances. It helps that this is a story in which people eventually make healthy romantic choices, which is, again, not something we see enough of in fiction. It wasn’t perfect, but Attachments was pretty much what I needed it to be: an easy, comfy read, and one that utterly failed to enrage me.