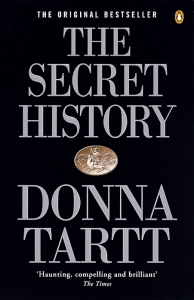 Donna Tartt’s The Secret History is set at an exclusive college in rural Vermont. Our Narrator is Richard Papen, an ambitious but not particularly well-off young man who, by way of an esoteric course in Ancient Greek, falls in with a group of fantastically wealthy students.

It has what I think of as a Gothic structure: one that turns in on itself, compulsively enacting a sort of Freudian return of the repressed. Right at its centre (literally and metaphorically) there is a murder: the entire novel revolves around that still point, as we discover why it happened and the effect that it’s had on these students’ lives. It is an essentially stagnant structure: the narrative’s constant return to the image of the murder reflects the characters’ inability to escape its consequences. As Richard explains in the prologue, their lives will contain no other story but this one. They are trapped in this moment of trauma, defined by it, even as they move further in time from the event itself.

It’s not quite Gothic enough for me, though: it lacks the hallucinatory overwriting of a proper Gothic novel (think Gormenghast or The Mysteries of Udolpho). Tartt’s prose is just a little too conventionally “realistic” to suck you in, cloak you in the abject horror of the repressed returning past. I enjoyed The Secret History, but it felt just a little too controlled; a little too carefully structured.