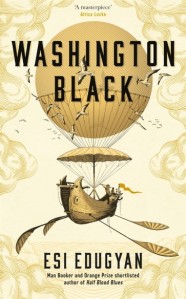 I am, for once, writing this review too early rather than waay too late. By which I mean: Esi Edugyan’s Washington Black is a high seed in this year’s Tournament of Books, which has not happened yet, and thus I miss out on the kind of fascinating, thought-provoking discussion that would allow me to formulate an actual response to this novel instead of a stream-of-consciousness ramble.

I have, however, been in time to nominate Washington Black for a Hugo Award, on the basis that the WSFS effectively defines SFF as “whatever you think it is”, and the novel (briefly) has an airship in it, and is, therefore, steampunk, QED.

Some context might be nice, yes? Washington Black‘s eponymous hero is a plantation slave in Barbados when the novel opens. At just twelve years old, he’s selected by his owner’s brother Titch as an assistant: Titch is building an airship/hot air balloon/thing called the Cloud Cutter. After a series of events put Wash in the frame for murdering a white man (a murder he didn’t commit), he and Titch escape together in the Cloud Cutter, which promptly crashes into a merchant ship, and then…

Well, it’s the kind of novel where a lot of things happen one after the other for perfectly good, logical reasons, only where you end up is quite different to where you began. It is, in fact, picaresque. Ever since Henry Fielding wrote Tom Jones in 1749, the picaresque in English has been a social novel, in explicit opposition to the personal, confessional novelistic tradition exemplified by Samuel Richardson’s contemporaneous Pamela (seriously, don’t read either of them, Tom’s very sexist and Pamela’s a wimp). The picaresque is interested in the roles its characters take with regards to the people around them. Hence the endlessly various situations picaresque heroes tend to end up in: you don’t particularly believe that they would all happen to the same person, but that’s really beside the point, which is to interrogate how a person formed in a specific way responds to different social roles or situations.

It’s interesting that Edugyan chooses this genre – which is usually satirical, larger than life, funny – to talk about the legacy of the transatlantic slave trade, which is none of those things. I think it works because of the way Wash’s former status follows him around: it doesn’t matter where he goes or which roles he takes on, he can’t escape the fact that he was once a slave, and that he’s been deemed a murderer. There’s this remorseless focus on the physicality of Black bodies, even in the genteel parlours of Georgian England. A “rope of blood” is a recurring image. We are reminded constantly of the processes of dehumanisation that enabled the slave trade, the reduction of people to nameless bodies and their labour. We are reminded, constantly, of the many-formed ubiquity of racism.

Is it steampunk, though? I’d call it anti-steampunk: it subverts all the ideas that steampunk holds dear. The Cloud Catcher crashes out of history, never to be seen again, on about page 20. Its only narrative function, maybe, is to get us to look for other steampunk tropes. Wash has a talent for drawing, which evolves into an interest in the biology of sea creatures and then into invention. He draws and designs and writes and never gets credit for any of it – a rebuke to the unexamined steampunk ideal of the lone inventor. Unexamined because culturally specific: that lone inventor is always, and because always, invisibly, white. Or, rather, the ideal is founded in white privilege: the ability of a white person to ignore the nuances of cultural specificity.

So, yeah. I like how this novel repurposes genres essentially created by, and for, white men, and forces us to think about how those narrative structures fail people who aren’t white men. I don’t think it’ll win the ToB: it’s got neither the overwhelming weight or the broad likability that between them characterise most ToB winners. But I am looking forward to what people think about it.