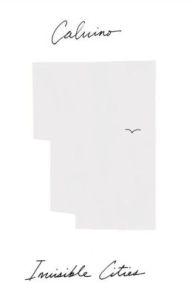 Confession time, here’s what I’ve got: I have no idea what to say about Italo Calvino’s Invisible Cities.

The explorer Marco Polo sits in the palace of Kublai Khan, and tells the ageing emperor stories of the cities he has visited. There is a city whose inhabitants tie threads between the houses to show the relationships between their inhabitants. There is a city constructed entirely of rope bridges over a gaping chasm. There is a city where the mummified bodies of the dead are placed in complex underground tableaux, mirroring the living city above. And so on. There are fifty-five cities in all, all of them with women’s names.

Is it a novel? Is it a work of philosophy? Is it a collection of prose poems? What does it mean? Does it mean anything?

The 2019 Tournament of Books started today: the only place on the internet where it’s actually safe to read the comments. One of the things the ToB always reminds me is that reader response is a valid way of interrogating texts; that your visceral response to a book can be an excellent guide to what it’s trying to do.

So. Invisible Cities is, above all, a difficult work. Or – if “difficult” is too loaded a word – it is oblique. In the frame scenes between Marco Polo and Kublai Khan, there’s a lot of discussion about the impossibility of describing the places Marco Polo has seen accurately. Initially, the explorer and the emperor have no shared language, and Polo has to perform the cities to Kublai, representing each city with a gesture, or an object. But Calvino (Polo?) is keen to point out that none of these gestures or objects have any symbolic relation to the cities they stand for: the gestures and objects are random. There’s something here about the inadequacy, the paucity of language, I think, how words have no symbolic link with what they signify, which makes describing a thing ultimately useless: there is no way to convey the reality of the thing, its thing-ness, your experience of it. Perhaps that’s why none of Calvino’s invisible cities really feel like cities. They are too schematic, there is only ever one thing that happens in them; they do not live. The act of retelling, of turning them into anecdotes, has flattened them, stripped them of something vital.

Relatedly: is this a book about empire? This Kublai Khan, like Alexander the Great, has overrun so much of the world that there is nothing left to conquer. His interrogation of Polo, his need to have his empire described to him, is ultimately unsatisfactory. Empire consumes cities, uses them up, in a never-ending quest for novelty, for an exoticism that flattens its subjects.

But there is also something going on here to do with impenetrability. Many of the rituals of Marco Polo’s cities are obscure or macabre. There’s a city which you don’t know you’re in until you’ve left. They are mysteries, often deliberately so; they seem to have meanings which are inaccessible. This impenetrability is different to the inability of language to describe experience, and it is not just a product of exoticism: there is a sense in which each city is indescribable not just technically, because of the limitations of language, but also essentially, because of what it is. A city is a thing so huge and deep and complex that its surfaces are not rational, they seem to make little sense, because we do not have access to the conglomerates of history and ritual and human interaction that have brought about those surfaces. The truth of a city is a thing that can only be glimpsed obliquely, in half-sense metaphors, in moods, even in what other cities think of it.

To return to reader response: it seems fitting that I don’t really know how to talk about Invisible Cities, because it’s a book that itself doesn’t seem to know how to talk – about anything. Which sounds insulting, but: this is a book about the limits of language, about travel, about the stultifying effects of careless storytelling, about the very un-narratability of the city. There is, of course, a good deal more to say about it than I’ve managed to say here. I will probably need to read it again sometime.