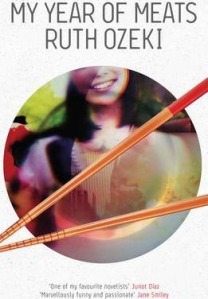 My Year of Meats confirmed it to me: I just love Ruth Ozeki’s writing. Her novels (by which I mean this and A Tale for the Time Being) have this extraordinary generosity: the world is screwed up, but there is grace too.

So: our heroine is Jane Takagi-Little, a Japanese-American filmmaker who’s hired at the beginning of the novel to make a reality TV series called My American Wife! Sponsored by BEEF-EX, an American beef export company which wants to expand its market share in Japan, the series is supposed to feature “wholesome” American wives making their favourite meat dishes. Jane, however, has a bit of a contrary streak, as well as a frustrated impulse towards telling the truth in her documentaries, and inspired by both of these things she starts learning more about the meat industry and seeking out more diverse families to feature in the series.

Interwoven with Jane’s story is that of Akiko, a Japanese woman in an abusive relationship with a husband, Joichi, who she’s never particularly cared for and whose primary interest in his wife is mainly her childbearing capacities. Convinced that meat-eating is the secret to conception, he demands that Akiko cook the recipes featured on My American Wife!

I thought I would have a lot more to say about what My Year of Meats is doing, but it turns out I don’t really. That’s not a bad thing, at all. Ozeki draws connections between these seemingly unrelated topics elegantly, delicately – although “delicate” feels like an odd word to use of a novel that features miscarriages, slaughterhouses, hormone poisoning and bulimia. And I love how she posits ways out of the system, however imperfect: ways to escape abusive patriarchy and the webs of big industry. They’re not perfect, because the world is imperfect; but there is grace.

Oh, but. It’s a moderate but. It’s particularly glaring, though, given how well these women’s narratives are handled otherwise. Right at the end of the novel, Jane finds a man named Sloan, with whom she has History, in a bar. The History involves casual sex that gets gradually more serious and then a Crisis and lots of anger but also lots of romantic tension, and basically the novel encourages us to root for this couple despite/because of everything that’s happened to them. They’re technically separated at this point, but as soon as Sloan sees Jane he gives the cold shoulder to another woman he’s clearly romantically involved with and forcibly marches Jane out the bar, and then they shout at each other and have sex and everything’s fine again.

This is a novel that’s in part about escaping domestic abuse. Do we need it to end with a man twisting a woman’s arm up her back only for them to ride happily off into the sunset? We do not. Please and thank you.

Still. With that caveat, My Year of Meats is a lovely thing. And I’ll be reading more of Ozeki’s work.