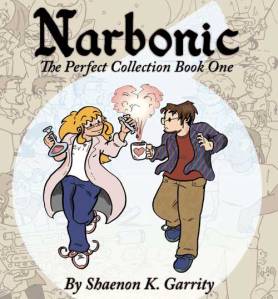 Narbonic was a webcomic that ran daily between 2000 and 2006. I only know this because the Bandersnatch supported a Kickstarter to publish the entire run in two physical volumes, which thus currently reside on our bookshelves. (You can also find Narbonics here, for free, with notes by author Shaenon K. Garrity. This will prove to be a source of distraction and procrastination for me for at least the next week or so. Although I am told it is also a source of spoilers for the second volume, so.)

The strip revolves around the exploits of Helen B. Narbon, mad scientist, and her henchfolk: Dave the computer guy, Mell the evil intern and Artie the genetically engineered superintelligent gerbil.

Actually analysing something like this feels a bit like missing the point. It’s not really…for that? Most of what it’s doing is mashing up our cultural expectations of what mad scientists are and do with Western cultural codes around the workplace. For Humorous Effect, obviously. And it’s a webcomic: I’m not sure how far Garrity planned in advance, but certainly the early strips are an explosive mish-mash of cultural references and themes and general light-hearted internetty fooling around. It’s fun, and it’s possible to enjoy things that are fun, but I’m not sure there’s that much more to say about it.