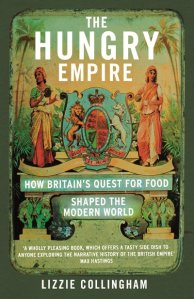 Full title: The Hungry Empire: How Britain’s Quest for Food Shaped the Modern World. Historian Lizzie Collingham’s book is a voyage round the British Empire in twenty dishes, from Newfoundland salt cod in the sixteenth century to iguana curry in Guyana, 1993. It examines the global webs of trade and influence associated with each of these meals that maintained imperial power and kept Britain, specifically, fed – invariably at the expense of the countries under her rule. (Coincidentally, the other day I read Shiv Ramdas’ story “And Now His Lordship Is Laughing”, which is about the famines in Bengal caused when Winston Churchill’s government chose to divert the region’s food to Allied troops in the Middle East – one of the episodes covered by The Hungry Empire.)

One of the things I really appreciated about The Hungry Empire was how it made me re-evaluate what the past looked like. Take the Newfoundland salt cod, which became a fundamental underpinning of the Atlantic slave trade: the process for catching, drying and preparing the fish was done on an industrial scale, making those fisheries on the shore of the Atlantic in the sixteenth century basically the first factory food plant. That was five hundred years ago.

Also: after the enclosure of common land in the mid to late seventeenth century in England, milk was too expensive for the working classes; treacle (made from sugar farmed by slaves in the Caribbean) scraped across bread became the staple meal. The widespread adoption of tea by the English working classes was actually a symptom of poverty: rising coal prices meant they could no longer afford to brew beer, which was highly nutritious, and a cup of (almost nutritionally worthless) tea with their bread at least gave the impression that they were eating a hot meal.

The general drift of the book is that the imperial past was also a lot more global a lot earlier than we often think. There’s some highly sophisticated trade links going on around the world that often served to prop up the exploitation of minorities everywhere – not just the Atlantic slave trade or the famines in Bengal; the practice of hiring indentured workers from India to harvest sugar after the abolition of slavery in the Caribbean is covered, as is the fact that imperial trade brought nutritional deficiencies to parts of Africa in the nineteenth century: American maize became a staple foodstuff on the continent, but local populations didn’t know that if it’s not prepared correctly it’s nutritionally rubbish.

It’s also depressingly unsurprising to find out that the British government caused the tensions between Protestants and Catholics in Ireland by moving Protestant English farmers onto the island and stealing Catholic land to farm it in a “civilised” way.

The “British empire in twenty meals” thing works really well to convey the scale and complexity of how trade sustained and enabled these oppressions, precisely because it gives Collingham the range to look at food production around the world while also drawing out shared themes and reverberations of cause and effect. The result is a really interesting look at the roots of globalisation and its associated injustices that’s focused and engaging while also spanning five centuries of empire. I would love to read more history books like this one.