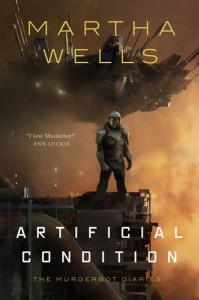 This post comes with a disclaimer: I have not read any other Murderbot books (because they were not Hugo finalists). This seems to make a difference.

Martha Wells’ novella Artificial Condition is, so t’Internet tells me, the second book about Murderbot: an escaped security robot that likes TV shows and once apparently massacred a bunch of humans on a mining planet, for reasons it cannot fathom or remember. In Artificial Condition, it returns to the scene of the crime to try and find out more about why it did what it did, and why it can’t remember doing it.

So…this is a text that’s interested in two things, I think. One is the age-old question of what rights AIs have, and whether they’re people. This is interestingly modulated from the usual Asimovian models by the fact that Murderbot doesn’t have a gender: Murderbot’s pronoun is “it”. Which foregrounds how gender is built into our ideas of personhood quite effectively: typically, we use “it” for things, not people. Yet Murderbot is a person. Should it have to engage with gender, a concept it sees as meaningless, just to be recognised as such? This feels like a really topical take on the question of AI sentience and associated debates about thingness and difference and who gets to have rights. It’s also interesting to compare this usage to the servitors in Yoon Ha Lee’s Machineries of Empire trilogy: they are sentient “its” too, but aren’t humanoid in the way that Murderbot is, and so I think don’t run into the same cultural assumptions about gender and personhood.

Overlapping with the question of AI rights, and possibly a little more timely, is the novella’s anxiety about corporate power. Murderbot is on the run from its manufacturers, who (it transpires) are partly or wholly responsible for the massacre, and for Murderbot’s own inability to remember or find out what happened. That inherently unequal power dynamic is reflected in the plight of the group of techs who hire Murderbot as a security consultant, giving it an excuse to visit the mining facility: the techs’ employer RaviHyral has stolen their intellectual copyright. Though RaviHyral has agreed to give it back, the techs think their lives might be in danger if they go to collect the files. In this world, as, increasingly, in ours, the big corporations hold all the cards – and both AI and human rights are threatened by this. Positioning both the techs and Murderbot as disposable in the eyes of the corporations also has the effect of blurring the line between employer and owner: Murderbot’s manufacturers see it as a thing; RaviHyral, similarly, sees its techs as a resource to be plundered, not people with rights. Again, Wells is raising questions of personhood and who gets to have rights.

So…I think there is interesting conceptual work being done here. But, for me, the paths Wells treads are a little too well-worn: it’s hardly unusual to read about evil corporations, and the question of AI rights is as old as science fiction itself. And the things that are new and unusual aren’t necessarily the themes that are being particularly drawn out in the text.

I would probably read more Murderbot, but I’d have preferred to see Gods, Monsters and the Lucky Peach (another novella about capitalism and different modes of personhood!) take the Hugo.