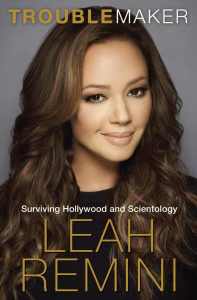 Welp, one of those things is very different from the other.

That kind of sums up how I feel about this book. It’s a memoir by actor Leah Remini, who is apparently quite big in the US (I had never heard of her before stumbling across this in the religion section at the library). She was raised into Scientology by her mother, who converted when Remini was nine and moved to a church facility in Los Angeles, where she stayed until breaking into Hollywood (although she didn’t leave the church until 2013, at the age of 25). The book focuses both on Remini’s life as a Scientologist and on her acting career.

It’s…fine? As an account of the various horrors that the church perpetuates, it feels pretty superficial – which is strange, because there’s plenty of fuckery going on, whether that’s an auditor demanding $40,000 in payment for three months’ worth of stolen burgers in the eighties or the church grooming a woman to be Tom Cruise’s girlfriend. It’s ghostwritten, so I imagine that has something to do with it. And there’s also the fact that Remini spends a good portion of her Scientology career in their celebrity programme, being buttered up for vast amounts of cash (like, millions of dollars, by all accounts); I got the sense that she was sheltered from the church’s worst abuses because of how valuable she was to them. I’d have preferred to read the story of an ordinary Scientologist who didn’t have that kind of money or name recognition to offer the organisation.

The last chapters of the book are the closest it comes to properly chilling. Remini was reasonably close friends with Shelly Miscavige, the wife of the church’s leader David Miscavige. Around 2006, Shelly abruptly disappeared from public life. Remini suspects she’s being imprisoned in a high-security Scientology compound in California; despite two missing persons reports and some pretty suspicious circumstances, Shelly is still missing.

Troublemaker isn’t very interesting as a Scientology memoir, and the writing’s not engaging enough to read it otherwise. Unless you’re interested in Remini herself, or are a massive Scientology completist, maybe…read something else?