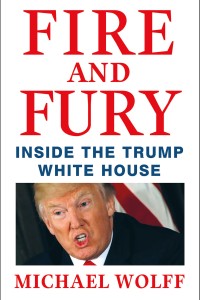 “Why are you reading that?” asked the Bandersnatch in a kind of astonished horror as I settled down with Fire and Fury, Michael Wolff’s much-debated account of life in Donald Trump’s White House. And it is true that, like most people I know who are still sane, I try and manage my exposure to news about Trump, Brexit and similar geopolitical movements for fear of breaking down in complete and utter despair.

But. It has to be said, there is something compulsively awful about Trump; something about the certain knowledge that he has neither the moral rectitude nor the political smarts to be holding the office he is holding; about the way his administration is so publicly, almost unashamedly ridiculous. The eccentrically-punctuated Tweets. The outrageous, easily-disproved lies. The utter lack of coherent policy. It’s this can’t-look-away train-wreck vibe Fire and Fury taps into: the addictive quality of a con perpetuated on an entire nation.

None of what Wolff’s written – apparently as a result of just…floating unmanaged around the White House? which honestly doesn’t seem unlikely – will be much of a surprise to a liberal reader: Trump allegedly doesn’t read, doesn’t have a foreign policy and will do whatever the last person he had a conversation with says he should do; engages in real-time conversation with Fox News, didn’t really think he was going to become president and has a vendetta against gossip columnists. It’s admittedly horrifying, but also, like a really juicy celebrity biography or Netflix’s documentary about Fyre Festival, quite a lot of…fun to read about.

That’s because the book doesn’t look at all at the actual effects of Trump’s actions on America’s people, its democracy and its public life. Both the book’s attraction and its downside lie in the fact that it treats Trump as he undoubtedly loves to be treated: as the centre of it all, the main attraction, as a celebrity rather than a politician making decisions that represent life or death for millions of ordinary people. If celebrity culture and distrust of experts is (part of) what got Trump into the White House, we may ask, is this unreferenced, gossipy account really helping?

I mean, not to be too holier-than-thou: I read this because it promised to be pacey and entertaining, and would probably not want to wade into a tome about all the depressing things Trump is doing to the world. And there’s also the fact that Trump really hates this book, having infamously tried to suppress it before it got published. So! If it annoys the worst man in the world, can it really be that bad?