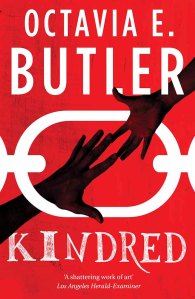 Octavia Butler’s 1979 novel Kindred is the story of Dana, a Black woman in 70s America who finds herself inexplicably and repeatedly travelling to pre-Civil War Maryland – an exceptionally dangerous place and time for any Black person. Gradually she figures out she’s being pulled there by her white ancestor, Rufus, the son of a plantation owner and eventually a slaveowner himself; and that, despite his cruelty and sense of entitlement, she needs to keep him alive long enough to conceive the daughter who’ll become Dana’s great-great-grandmother.

There’s a lot going on in Kindred, but at its heart it’s an exploration of power and responsibility. What stands out to me particularly is Dana’s ambiguous position in plantation life. Her modernity makes the nightmare that is the antebellum south both more acute and more survivable – it gives her emotional and physical resources (medicine, a historical education, the simple knowledge that things get better) that her enslaved ancestors do not have access to. She occupies a liminal position socially – not technically a slave, but not free either, as once Rufus works out who she is and why she keeps returning he holds that knowledge over her in an attempt to control her. But that very attempt gives her power too – his regard for her is something Dana can exploit in her own interest and that of the plantation’s slaves.

To me this complex dynamic links to a whole theme of compromise across the novel: specifically, the compromises that Dana and to an extent the other slaves on the plantation have to make every day to survive and to protect their children and families. For instance, Dana realises about halfway through the novel (after her great-great-grandmother Hagar is born) that Rufus’ death would paradoxically be a terrible thing for the plantation’s slaves: it would mean the sale of the estate and almost certainly the break-up of slave families. The crisis of the novel is really about the bounds on her personal autonomy that Dana will accept to avoid that eventuality – how many of her modern expectations of humane treatment she can bear to shed to protect the people who’ve become her friends. Rufus does eventually go too far, and Dana stabs him in self-defence; with her reason for time-travelling gone, she returns to the 1970s for good, left with a sense of guilt for the estate sale she knows will follow/has followed. The question that the text leaves us with is: How responsible is Dana for the break-up of those families? Of course it was her actions that ultimately precipitated it, but when a whole society is arrayed against you can you ever really make good decisions? And I think the whole project of Kindred is about complicating simplistic conceptions of slavery. (Butler herself said that she wrote Kindred in response to a young Black activist saying that he hated his ancestors for not standing up to white people.) For Dana and the slaves of Kindred, there are just no easy or right answers, no moral certitude.

Kindred is, accordingly, not an easy read, but it is a thoughtful and fascinating one; like the best SFF, it uses its speculative elements to achieve an effect that realistic fiction cannot. In its interrogation of our assumptions about slavery, power, responsibility and history it remains incredibly timely despite its age. There have been heated debates about the concept of an SFF canon recently, but if ever there were a text that deserved its canonical status, it’s this one.