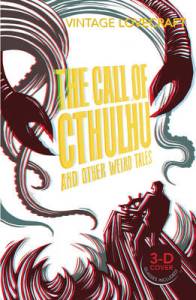 Reading the work of celebrated horror writer H.P. Lovecraft today is something of a fraught experience. Much recent discussion in SFF fandom has focused on how his virulent racism is foundational to the affect and worldview of his fiction, even where it is not made explicit. His shoggoths, his tentacular elder gods, his deep-sea monstrosities are all expressions of a profound fear of and hatred for the Other, which is often explicitly racially coded, tangled up too with a queasy disgust for fleshly physicality of all kinds. To read Lovecraft is to peer into a mind in turmoil, a psyche afraid of everything that is not itself. No wonder it’s terrifying.

And yet it’s difficult to deny that his work, his vision of the world of humanity as a tiny ship of sanity sailing on vast unknowable seas, has a visceral and frightening power; and that his shadow lies long on twentieth and twenty-first century fantasy. This, then, was why I found myself picking up this Vintage collection of Lovecraft’s short stories, having read Haunter of the Dark, volume 3 of Wordsworth Classics’ edition of his Collected Short Stories, a few years ago. I was interested to read more of the Cthulhu cycle, which Haunter of the Dark touches on only a little, and which has probably had the greatest impact of all Lovecraft’s work on general pop culture today: where and how did it all begin, I wanted to know.

What I found was, yes, interesting, and perhaps a little disappointing, as maybe all investigations into the source of things are. Essentially: I sort of think that most of Lovecraft’s stories fit maybe three or four basic templates, and once you have read three or four of his stories you have read as much as you need to. The particular formula that most of the stories in this collection follow is: academic/researcher/explorer delves too deep into ancient secrets; academic/researcher/explorer gains the attention of Things from Beyond that are better left alone; academic/researcher/explorer dies, goes mad or attempts to stop others from following in their footsteps and wreaking untold calamity upon the human race.

(The one story that doesn’t follow this formula in some manner is “The Festival”, which is instead an entry in the venerable “man witnesses dread ritual and ends up in hospital” tradition of storytelling. It is a decidedly minor work.)

Pulpy as this formula is (fictional scientists have been awakening powers they do not understand since Mary Shelley’s Frankenstein came out in 1818), it is not incidental to Lovecraft’s project. The vast majority of Lovecraft’s original output is from the interwar period, 1918-1939, and the stories in this collection are pretty evenly distributed across that span of time (the earliest, “The Picture in the House”, was written in 1920 and published in 1921; the latest, “The Thing on the Doorstep”, was written in 1933 and published 1937). In other words, he is writing in the aftermath of a conflict conducted on a literally industrial scale; the first such conflict in humanity’s history. Death was made mechanised; meaning and rationality fled in the face of such faceless violence. At the same time, scientists were making increasingly abstruse discoveries about the nature of the atom and of various kinds of radiation: we knew for the first time that much of matter is just empty space, and learned of dangerous and invisible energies that could give you cancer, or allow others to peer inside your body. Lovecraft’s tales of scientists pressing too hard against the borders of human knowledge reflects both the new understanding of the world as deterministic and uncaring (Cthulhu and his ilk care not at all about humans; they are consciousnesses utterly alien) and the seeming irrationality of what real-life scientists at the cutting edge of the field were finding.

My two favourite stories in this collection, then, are “The Nameless City” and “At the Mountains of Madness”. Both of them are about explorers venturing into an ancient and titanic city in some far-flung region of the earth; a city that predates humanity by some considerable margin. Both these stories, I think, absolutely nail the explorers’ gathering sense of horror as their understanding of the universe is gradually eroded; and as they come to understand that not only were these cities once inhabited by a vast and inhuman civilisation, members of that civilisation may still be down there in the depths of the earth. The fear these characters feel is not the relatively simple fear of the monstrous; it is the existential fear of that which is utterly beyond our experience, the fear of that which is beyond the human in scale and proportion.

The thing is, though, that existential horror is like most kinds of horror very vulnerable to over-explanation. This, it turns out, is what doesn’t quite work for me about the collection on an artistic level: Lovecraft’s “world”, his underlying mythos, is explicated more or less completely here, and knowing how it all works renders each individual story that less powerful. The atmosphere of “At the Mountains of Madness”, for example, is somewhat punctured when the shoggoths appear from the depths of the nameless Antarctic city. Shoggoths turn up everywhere in Lovecraft’s work as terrifying beings whose very appearance shocks people into gibbering madness – but as it turns out they are no more than formless, mindless lumps of flesh. Grotesque, perhaps, but not, like, mind-destroyingly horrible? One would think? In a similar vein, Lovecraft often has unfortunates who have witnessed cosmic horrors from beyond the boundaries of our dimensions moan unconnected and mysterious phrases, a technique that’s considerably less effective when you know what all those phrases mean. I think the conclusion that I’m groping towards, here, has to do with the regrettable tendencies of so many SFF authors to attempt to tie all their stories together into their own personal mythos. I don’t think “The Nameless City” needs to take place in the same universe as “The Haunter of the Dark”, for instance. I kind of wish I didn’t know that the Elder Things in “At the Mountains of Madness” are the same creatures that Gilman dreams about in “The Dreams in the Witch House”. I don’t gain anything from that knowledge; instead, I lose a potent sense of things half-known, half-coherent and dimly glimpsed; a sense that I think is closer to what Lovecraft actually wanted to achieve than the fully-articulated cosmology that we actually get.

There are other ways in which Lovecraft is technically not a good writer. He has basically no interest in character, for example. His prose, always verging on the purple, veers between Gothically appropriate to the subject matter and hysterically, repetitively overheated. He’s not doing anything particularly interesting with form or structure.

Despite those undoubted flaws, though, and the fact that his writing relentlessly, uncompromisingly shuts everyone who isn’t a straight white man out, I can see myself returning to it in the future, for the atmospheric power he achieves in his best passages, for his vision of a vast and uncaring universe. I am fascinated by these stories as much as I am revolted by them, although I’d hesitate to recommend them to, well, anyone. If you are going to read them, be warned: here there be monsters, of more than one kind.