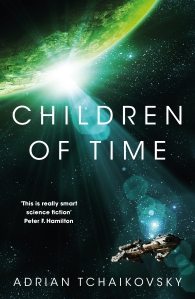 Adrian Tchaikovsky’s generation-ship-cum-insect-horror novel Children of Time won the Arthur C. Clarke Award in 2016 – not bad for a first SF novel (although Tchaikovsky had already written a slew of high fantasy novels) up against books like Nnedi Okorafor’s The Book of Phoenix and Dave Hutchinson’s Europe at Midnight. It’s classic hard science fiction with an important point to make, but I’m not sure I’d consider it award-worthy.

The novel begins aboard a space station orbiting a terraformed planet where polymath genius Dr Avrana Kern is about to see an ambitious project come to fruition: the planet is to play host to a population of monkeys infected with a virus that will, over thirty generations or so, give them near-human intelligence. However, the station’s sabotaged by an extremist agent protesting this evolutionary uplift, and so the monkeys never make it to the planet – but the virus does. Kern herself is the only survivor of the station’s destruction, as she commandeers the small satellite designed to watch over the monkeys during the long ages, leaving her colleagues to die in the blast.

Several thousand years later, the generation ship the Gilgamesh approaches the terraformed planet, fleeing an Earth irretrievably poisoned by Kern’s generation. Carrying five hundred thousand humans in cold sleep, it might be the last hope for humanity’s future. Our point of view character aboard the Gilgamesh is Holsten Mason, a scholar of the Old Empire – that’s us and our future, the civilisation that destroyed the Earth – who’s woken to puzzle out the messages being broadcast by the satellite still circling Kern’s planet, where Avrana still lies in cold sleep, her mind merging with the satellite’s computer and with an uploaded version of herself she created to decide when to wake her. She’s determined not to let the Gilgamesh and its crew onto the planet below; they, and particularly their authoritarian commander Guyen, are determined to land.

Meanwhile, unbeknownst to pretty much everyone, the virus has done its work not on the monkeys who never arrived, but on a humble species of spider, Portia labiata, now grown to monstrous size. Tchaikovsky alternates chapters set on the Gilgamesh with chapters following the cultural development of spider society, each told from the point of view of an individual named Portia; different spiders all with the same goal of learning more about their world and protecting their colonies from other uncannily intelligent insect species. The spiders work out how to manipulate ant colonies to produce various goods; they sequence their own genomes in order to develop vaccinations; they develop weapons and public transport systems. Their civilisation, although similar in function to human society, is very different technologically: they have no use for any form of combustion engine, for example, and spider-speech has more to do with vibration and gesture than with sound per se.

What’s common to both the rapidly-deteriorating society aboard the Gilgamesh and the rapidly-developing culture of the spiders is that both are working under the shadow of the Old Empire. Early on in their technological development the spiders intercept a radio message being broadcast by the satellite in their skies, which they see as a fast-moving star: the message contains a series of maths problems which impress the spiders with their geometrical neatness, and the spiders consequently dub the star the Messenger and worship it as a deity. When they finally develop the means to broadcast a message back and thus communicate with the satellite, Avrana Kern, still believing that she is speaking to uplifted monkeys, attempts to mould their society in humanity’s image – the image of the Old Empire. The spiders, who conceive of the world in very different ways, are thrown into confusion and strife by their deity’s odd demands; their cities begin to compete for resources where once they’d cooperated.

The crew of the Gilgamesh, too, are haunted by the Old Empire’s legacy. They come from a culture in which it’s impossible to achieve anything that the Empire hasn’t done before, and better. During the novel, they pillage an abandoned Old Empire terraforming station, where Guyen finds a machine of the sort that allowed Avrana Kern to upload her mind into the satellite’s computer, with imperfect results. Guyen, whose power as de facto leader of the human race is rapidly going to his head, hatches a plan to install his mind into the Gilgamesh’s computers, securing his own immortality and dooming the rest of the Gilgamesh’s crew and cargo to death as the ship and its computer fall apart. Mason, who in the course of the voyage has become increasingly disillusioned with the ancients, who he now sees as “clumsy, bickering, short-sighted monsters”, muses on humanity’s infinite capability for repeating its own mistakes:

the shining example of the Old Empire had tricked Holsten’s entire civilization into the error of mimicry. In trying to be the ancients, they had sealed their own fate – neither to reach those heights, nor any others, doomed instead to a history of mediocrity and envy.

This might be taken as a thesis statement for the novel as a whole, which repeatedly impresses on us the importance of resisting orthodoxy and established patterns of thought. The spiders’ great advantage, the reason they thrive, is curiosity: time and again we see new voices rise in spider society to challenge embedded social and religious tenets. Sources of authority in the novel are almost all suspicious and corrupt: Guyen’s ambitions, as we’ve seen, threaten the wellbeing of the Gilgamesh and its population; Avrana Kern is deranged by her long confinement in the satellite, as well as blinkered by her own ambitions; an attempted rebellion on the Gilgamesh goes badly wrong when its leader refuses to listen to people like Mason and the ship’s chief engineer Lain. The ending of the novel, finally, epitomises an ideal approach: human and spider intelligence combined to solve the intractable problem of coexistence, to create something new and better. “Sometimes all it takes, to crack a problem, is a new perspective,” Tchaikovsky writes in a triumphant closing chapter.

It’s a thesis that is of course pointed directly at our society, predecessor of Tchaikovsky’s Old Empire: if we’re to solve climate change and our intractable social problems, we need to challenge established orthodoxies and discard old modes of thought. As such it’s an unusually optimistic example of that old science fiction stalwart, the cautionary tale – optimistic in that it’s able to conjure a convincing alternative to human modes of thought and existence in the form of spider society.

And yet I found myself wanting more from the book: more complexity, more originality. The Gilgamesh chapters are thoroughly conventional. The breakdown of society aboard a generation ship; the Earth destroyed by weapons of mass destruction; the mad computer – none of these are unusual ideas, and nor is the characterisation particularly revelatory or inspired. More to the point, not a lot actually happens in these chapters; or, at least, nothing that moves the plot on very far. As a result, the Gilgamesh chapters are a lot less interesting than the spider ones; it’s difficult to care very much about the unpleasant, amoral people who surround Mason.

This is partly intentional: we’re supposed, I think, to root more for the dynamic spider society than for the dregs of humanity. But Tchaikovsky’s approach to spider society is also over-conventional: it’s stereotypically hard-SFnal in that it is entirely descriptive rather than illustrative. The various Portias featured in the spider chapters are eyes through which to experience their culture, not characters in themselves. These chapters are, in other words, exercises in worldbuilding. And although it’s clear that the spiders experience the world very differently from humans, we never viscerally encounter that alienness. The Portias are too readily understandable. In a novel that espouses the benefits of looking at the world through new eyes, this strikes me as a fatal flaw: form and content are not well-matched.

The Clarke award is, per its website, given to the best science fiction novel published in the UK each year. Even granting that the notion of there being one, singular, SF novel in any given year that can be objectively identified as the “best” is valid, and passing over whether an award jury accepting submissions from publishers is best-placed to identify that novel, it’s hard to see how anyone could have thought Children of Time was the best SF novel of 2016 – especially anyone who had also read The Book of Phoenix. While I think the novel is basically competent and has some interesting things to say, I don’t think that it’s pushing the boundaries of the genre or that it’s even a particularly unusual read. There’s much better stuff out there.