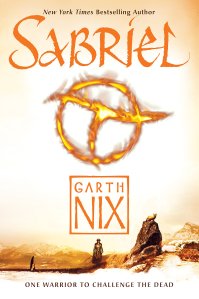 First published in 1995, Garth Nix’s Sabriel – the first novel in his Old Kingdom trilogy, which has now been expanded with two prequels – is something of a YA cult classic: though it hasn’t achieved the popular success of later-published YA series like the Twilight Saga or the Hunger Games, or even Philip Pullman’s contemporaneous His Dark Materials trilogy, it’s nevertheless a keystone text with a devoted following among SFF fans of a certain age. That devoted following, obviously, includes me: I first read it when I was ten or eleven (though it’s really meant for slightly older readers) and I’ve re-read it countless times since.

Its eponymous 18-year-old heroine is about to leave boarding school in Ancelstierre, a country with a vaguely 50s British vibe, when she receives a message intimating that her father is in trouble. Her father, though, is no ordinary man: he is the Abhorsen of the magical Old Kingdom bordering Ancelstierre, a necromancer charged not with raising the dead but with laying them back to rest. Something has trapped him in the river of Death, a perilous metaphysical watercourse where all sorts of uncanny beasties lurk. Instead of embarking on university and an ordinary life in Ancelstierre, Sabriel decides to cross the border into the Old Kingdom to search for her father’s body, without which she cannot bring back his spirit from the river.

In true YA fashion, it’s a novel about growing up and working out one’s place in society. The absent parent is of course a classic trope of YA and children’s literature, and Sabriel demonstrates why: in attempting to save her father, Sabriel effectively takes his place, donning the traditional garb of the Abhorsen, wielding his sword and taking up with his delightfully sarky feline companion Mogget. Her father’s absence, in other words, is exactly what empowers her to succeed him.

What’s significant about this process of self-discovery, of growing up, is that, despite Sabriel’s heritage and the relative vibrancy of the Old Kingdom, it’s framed through an Ancelstierran lens. Sabriel hasn’t lived in the Old Kingdom since she was five years old, so she spends much of the novel learning about its lore, its customs and the state of its affairs (parlous: it hasn’t had a government for twenty years or a monarch for two hundred). She interprets it all through the lens of her education, drawing on etiquette lessons, schoolgirl experiences and memories of Ancelstierre to navigate and relate to the various challenges she faces in the Old Kingdom. What’s more, the novel’s climax sees her return to her old school in order to fight off a magical incursion as mundane Ancelstierre becomes a target of Kerrigor, the terrifying Dead creature who’s responsible for her father’s imprisonment. She leaves Ancelstierre as a schoolgirl; she returns as a powerful woman, capable of commanding a military force as well as the teachers who once had authority over her. It’s a signal that she has taken up her place in the social order and become a functioning adult.

It’s also indicative of her ability to mediate between binaries, something else the novel is quite interested in. She is, as we’ve seen, a product of both mundane Ancelstierre and the magical Old Kingdom; it’s her ability to navigate Ancelstierran society, combined with the knowledge she has from her father and the assistance of her Old Kingdom allies, that ultimately allows her to save both countries from Kerrigor’s army. The low-key romance between her and Touchstone, the young man she rescues from magical suspension in the Old Kingdom, is another way of uniting Ancelstierre and the Old Kingdom. Additionally, as an Abhorsen, she’s unique in being able to combine the orderly power of Charter Magic, with its system of mystical marks that can be built up into spells, with the wild chaos of Free Magic, a dangerous tool that’s usually the sole province of rogue necromancers. This uniting of opposites is, I think, to do with medieval fantasy’s drive towards restoring order: as the official guardian of the border between Life and Death, the Abhorsen’s ability to live in two different worlds at once is key to preserving a natural balance of power in the kingdom. Restoring that balance is essential to restoring the Old Kingdom.

That drive towards order springs from the genre’s conservatism, and as such there are problematic aspects to the novel: the fact that power in the Old Kingdom is tied to bloodlines; the fact that every main character in the novel possesses significant privilege. And yet, when considered within the genre, Sabriel is quite progressive, especially for its time. Sabriel is a rounded, well-developed female character who gets to feel unsure, afraid, jealous, without compromising her heroism and bravery; she is, in short, convincingly characterised as a fairly ordinary 18-year-old thrust into extraordinary circumstances. Nor does “ordinary” mean “banal”: neither she nor her classmates are portrayed as shallow or disengaged from the world, despite their cloistered upbringing. Her romance with Touchstone is sweet and absolutely drama-free, and in no way distracts from her determination to save her father and defeat Kerrigor. There are even brief mentions of menstruation and sex: nothing detailed, nothing R-rated, but they’re there as acknowledgements that teenage girls do think about these things, and that’s valuable – especially in fantasy of this kind, where you’d think nobody ever had periods at all. Nix writes with great respect for his young protagonist, and it’s this that makes Sabriel and its sequels such a breath of fresh air.

This isn’t, then, a perfect novel; does such a thing even exist? But it’s telling that it does stand up pretty well to re-reading 26 years after its original publication. It’s certainly a novel that deserves to be better known, I think; it’s not until recently that I’ve realised just how lucky I was to have read this as a child, to have been able to internalise the message that girls can be just as strong and powerful and brave as the boys who populate so much fantasy. And even now, even with so much good feminist fantasy YA on the shelves, I can’t think of many circumstances in which I’d hesitate to recommend it – to adults as well as youngsters. It really is that good. If you’re into fantasy at all, do yourself a favour and buy a copy.