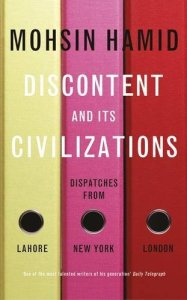 Per Wikipedia, Sigmund Freud’s 1929 work Civilization and its Discontents explores the “clash between the desire for individuality and the expectations of society”. It’s a revealing metatext for Pakistani novelist Mohsin Hamid’s essay collection Discontent and its Civilizations, one of the overarching themes of which is the way in which the concept of civilization is used to enforce conformity and to exclude those classed as “other”.

The collection’s split into three sections, Life, Art and Politics. The first two sections cover some interesting ground around Hamid’s relationship with the country he was born in and his views on things like the great American novel, the use of the second person in fiction and the advantages of paper books over ebooks; but I’ll admit that what I really remember about the book is the Politics section, with its insight into the realities of everyday life in Pakistan, into the effects of drone warfare on Pakistani communities, into the suppression of religious minorities in the country. It seems to me that we don’t hear a lot about Pakistan in the West aside from news articles about the country’s border disputes with India – although of course that might be my own personal bias talking – and Hamid’s book is a valuable source of context for the country’s recent history and the challenges it’s facing today.

I haven’t read any of Hamid’s fiction, although his most recent novel Exit West is on my radar. For me, Discontent and its Civilizations stands well on its own as a useful perspective on a country I didn’t know much about. It’s only by engaging with such perspectives, surely, that we can resist the nationalising forces that that the book’s title refers to, the temptation to reduce others to their labels; the temptation to simplify and vilify that ultimately makes us all less free.