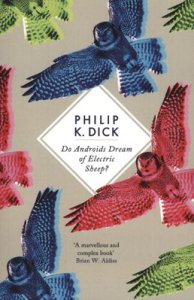 How does one review a novel like Do Androids Dream of Electric Sheep? Its cultural legacy precedes it: a film adaptation that’s widely recognised as one of the greatest pieces of SF cinema of all time; an influence that’s discernible in the work of nearly every major SF writer of the twentieth century; a regular spot on “best SF novels of all time” lists. As a reader, how do you form your own opinion in the face of such a legacy? And as a reviewer, how do you write honestly about the novel without simply repeating the views of critics gone before?

These are particularly apt questions for Do Androids Dream, a novel whose main concern is precisely authenticity. Protagonist Rick Deckard, a bounty hunter for the San Francisco Police Department, is assigned to find and destroy six escaped androids of an advanced model nearly indistinguishable from a human. The only way to tell the difference is by applying something called the Voigt-Kampf test, which apparently tracks eye movement to test for empathy – something androids seemingly do not have. But does the test work? Could an advanced android pass it – or a neurodivergent human fail? Human emotion is, after all, most often synthesised in the world of the novel, with both Deckard and his wife Iran using “Penfield Mood Organs” to dial up sensations like hope, depression and joy on demand. Both Deckard and Iran are also followers of a religion known as Mercerism, using so-called “empathy boxes” to tune into a simulation of the religion’s central figure Wilbur Mercer climbing an endless hill while being pelted with stones – a simulation that gives every user access to every other user’s emotions. But is Wilbur Mercer himself real, or just an obscure actor in a strange film? What about the talk-show host they all listen to, apparently the only source of entertainment in Dick’s blasted, post-apocalyptic future? How does he broadcast twenty-four hours a day on multiple channels?

Then there’s the electric sheep of the novel’s title. Animals are all but extinct in this particular future, thanks to a ghastly nuclear war that has left vast tracts of land barren and tainted the human genome (causing another blurring of the boundaries between human and inhuman). To own a live animal is a much-prized status symbol; but they’re so expensive that an industry has sprung up to supply good fakes for the purposes of keeping up appearances, and there are several moments in the novel when a live animal is confused for an electric one, and vice versa. (This can be distressing, as when a seriously ill cat dies because nobody realises it’s real. Here I’ll also give a content warning for graphic animal cruelty in a scene late in the novel.)

So the novel’s affect is a kind of epistemological uncertainty. The question “how can we tell the difference between the authentic and the fake?” is not one that has an answer. We can’t. It has become impossible, Dick suggests, in our world of machines and computers and devices. (In this he is startlingly prescient: the novel was published in 1968, before the internet, social media, chatbots, VR…) Just as there is now no way to experience his novel “authentically”, free of the influence of the thousands of critics, novelists and film directors who have responded to it down the years.

For what it’s worth: I, personally, was not a massive fan. I’ve written about this before, but I tend not to enjoy novels characterised by unrelenting bleakness: I need a little hope, a little humanity, to keep me going, and Dick’s barren, denuded world is not one I particularly want to spend time in. Its importance to the genre is undeniable, and for that reason I guess I’m glad I read it. But it’s not a text that particularly spoke to me, or one I’m keen to revisit.

One thought on “Review: Do Androids Dream of Electric Sheep?”