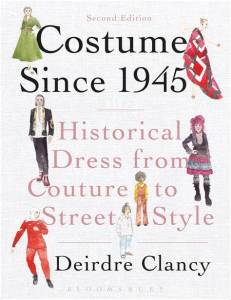 Deirdre Clancy’s Costume Since 1945 is pretty much what it says on the tin: an illustrated history of the key fashions and modes of dress that were prominent throughout the second half of the 20th century. Clancy is a costume designer, and the book’s illustrated not with photographs but with Clancy’s own drawings, miniature people modelling the looks she’s talking about in the text.

It’s an interesting idea – interesting enough to enough people, apparently, that the book is now in its second edition – but I think I wanted clearer images pointing out key silhouettes (silhouettes, as I’ve recently learned, being more important to recreating the feel of historical dress than the actual garments).

I also seem to remember that the text is very iffy when it comes to identities that aren’t white, cishet and abled. There is some treatment of non-Western fashions but it’s not in any way systematic, and Clancy in many cases doesn’t provide the context to make their inclusion meaningful or helpful. There aren’t I think any disabled people represented, and the book also features outdated terminology for trans people (the second edition came out in 2015). I guess it might be useful as a general reference text, but it wasn’t quite as comprehensive or informative as I expected and it wouldn’t be my first choice.