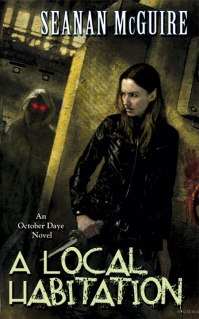 Murder mystery and techno-gothic are odd bedfellows, as are fairies and computers, but Seanan McGuire achieves an interesting synthesis in A Local Habitation. This, the second novel in her immensely popular urban fantasy series following the half-human, half-fae PI October “Toby” Daye, sees our protagonist sent by her liege Sylvester to the fae County of Tamed Lightning to check up on Sylvester’s niece January, who’s been out of contact for a couple of months. January’s outfit turns out to be a tech company where people are dying in mysterious ways; they’ve been keeping it quiet so as not to draw the attention of local fiefdoms who’d be more than happy to move in on a struggling independent County. Now Toby’s on the scene, it’s up to her to find out who’s behind the murders before the situation gets substantially worse.

With a steadily mounting body count and a closed circle of suspects, A Local Habitation is in some senses as classical a murder mystery as it gets. Its structuring principle, like that of all murder mystery, is about restoring order by closing down violent, irrational tendencies within the County of Tamed Lightning. McGuire adapts this template to the speculative genre she’s writing in by making those irrational tendencies quintessentially Gothic ones: her murderers are a changeling succumbing to the madness that threatens everyone with half-human, half-fae blood, and a kind of fae cyborg, a dryad whose consciousness was transferred into Tamed Lightning’s mainframe when her tree was cut down. These two Gothic figures are working on a scheme to upload fae minds and thereby preserve fae culture against the encroachment of humanity and the disenchantment of the world – that is, to create a ghostly, Gothic simulacrum of Faerie.

How does the murder mystery structure work to close down the anxieties induced by these figures – anxieties around madness and the threat that technology poses to personhood? This is where it gets interesting. Gordan, the changeling, may end the novel dead; her obsessive, single-minded focus on her goal is no longer a threat. But the spectre of her madness still troubles the novel’s world: Toby is a changeling too, and Gordan’s actions put her under suspicion. The way McGuire handles technology in the context of Faerie is also fascinating: it’s not Gordan’s plot itself that’s dangerous, but the fact that she’s willing to kill people to perfect the technology. Her accomplice, April, revealed as a sympathetic character who didn’t realise the people Gordan was killing couldn’t be rebooted, is reinscribed into the social order at the end of the novel by becoming Countess of Tamed Lightning – presumably free to continue Gordan’s work in a less homicidal manner. The threat of technology, unlike the threat of madness, is tamed here, brought into Faerie’s service.

It’s a shame that this doesn’t look set to be further examined in later books: I feel like there’s a lot of potential to be exploited in the tension between technology and magic (which is only an extension of the tension that powers all urban fantasy) and the paradox inherent in using human technology to combat problems caused by humans, and McGuire only really touches on this tension in A Local Habitation. It is, nevertheless, well-handled here: one of the things that elevates the Toby Daye series above most urban fantasy is the relative complexity of McGuire’s constructed world, the way she takes existing mythology and spins it into something both unexpected and completely consistent with her sources. Having fae who are comfortable with technology – comfortable enough to merge with it – feels counterintuitive, paradoxical; but it demonstrates a measure of flexibility and diversity among the fae as a whole that accounts for their survival into the modern age, in McGuire’s mythos. That I’d like to see a little more of this intersection between technology and magic isn’t a bad thing – it’s just an indication of how well it works here.