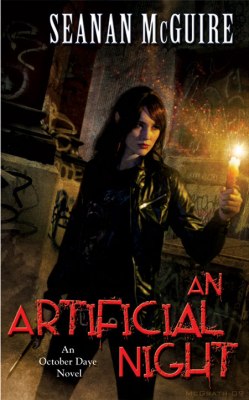 The third novel in Seanan McGuire’s October Daye series, An Artificial Night is I think the first to retool recognisable folkloric intertexts, rather than simply refer to mythological concepts and fairytale tropes. Tam Lin and the Wild Hunt are both in evidence here, as half-fae PI Toby is called on to rescue missing fae and human children from the fearsome Blind Michael and his Ride, which transforms its victims in terrifying ways.

At the most basic level, Blind Michael and his Ride, like their folkloric counterparts the Wild Hunt, represent the wild wood, the untameable forest, all that is dark and unknowable about nature; if we wanted to get Lacanian about it, we could describe the periodic return of the Ride as an unavoidable irruption of the Real into the life of Faerie, which, with its emphasis on arcane rules, promises and rituals is highly Symbolic. Named explicitly as a hero multiple times in the text, Toby becomes in this novel a guardian of the Symbolic order and of the fae culture that stands in opposition to the wild forces of nature. (This contrast between nature and culture, Real and Symbolic, is of course a deeply familiar one in Western literature: it’s there in almost every fairy and folk tale, including Tam Lin itself.)

But, as the only character in An Artificial Night who passes regularly between our world and that of Blind Michael, Toby is also a liminal, in-between figure, and we can see this playing out in other aspects of her characterisation too. She’s a changeling, half-human and half-fae, an in-between status that pureblood fae see as dangerous, an indicator of future madness, as we saw in the previous novel A Local Habitation. She’s also someone to whom the normal laws of Faerie don’t quite seem to apply: she’s friends with the sea-witch the Luidaeg, who terrifies most of Faerie’s other inhabitants; when we first met her in Rosemary and Rue, she was choosing to live as a human, ignoring, to some extent, the conventions of alliegance that govern Faerie. In An Artificial Night, moreover, she’s also revealed as someone who hovers between life and death, thanks to a death wish manifesting as a hero complex.

This liminality enables McGuire to explore the contradictions inherent in Toby’s psyche, and thus by way of identification that of the reader. Toby’s heroism, as we have seen, makes her a representative of order and of culture; but her potential madness and her death wish are reflections of something darker; they show her affinity with Blind Michael’s nonsense-realm, ruled by the logic of children’s rhymes, expressions of the blind forces of nature and of the Real. (To enter Blind Michael’s realm, Toby is turned into a child, perhaps representing a return to the Lacanian stage of development that precedes the Symbolic.) Her destruction of Blind Michael, then, represents her overcoming those forces within herself, and her re-identification with the Symbolic order.

This isn’t exactly groundbreaking, as a textual strategy; as I’ve said, you can find similar story-structures in pretty much every Western fairytale. But, perhaps paradoxically, that’s what makes it work: McGuire’s identified what makes these intensely familiar (to Western readers) stories tick, and transported them into a modern milieu, with a nicely conflicted New Adult-ish heroine; the result is vastly more resonant than a lot of fairytale retellings and urban fantasy (Sookie Stackhouse, I’m looking at you). It’s not going to set the world on fire, or inspire new insights into the human condition; and Toby’s hero complex can be downright annoying, as when she returns to Blind Michael’s realm after being dramatically rescued from that very place by a phalanx of devoted friends. But it is, on the whole, very readable. I’d happily read it again, even.