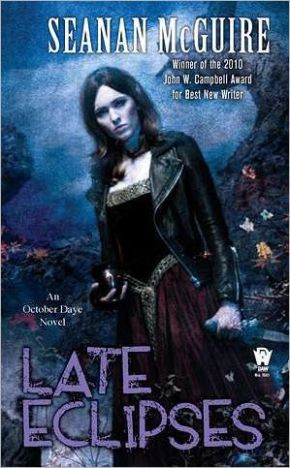 In this, the fourth novel in Seanan McGuire’s urban fantasy series following the exploits of fae PI October Daye, McGuire expands on a theme that began to take shape in its predecessor, An Artificial Night, and which will become increasingly important as the series goes on: the nature and desirability of heroism. In An Artificial Night, you’ll remember, Toby’s heroism was tantamount to a death wish, as she returned again and again into danger (in a fashion that ultimately became quite annoying) in order to slay the immensely powerful Blind Michael. Late Eclipses sees the consequences of that deed catching up with her, as the mercurial Queen of the Mists puts Toby on trial for the murder of a Firstborn, a crime that carries a death sentence. At the same time, her friends and allies, powerful members of the fae, are being poisoned by a villain with the ability to shape Toby’s thoughts, once again raising the spectre of the madness to which changelings and others with mixed fae heritage are supposedly subject. Can a Toby no longer in control of her own mind be trusted? And can she escape the Queen of the Mist’s persecution?

Interestingly, I think both of these questions are in their different ways approaching an issue that’s more often explored in modern superhero narratives: to what extent should heroic behaviour be subject to external scrutiny? The text takes it for granted, for instance, that Toby should be let off killing Blind Michael because he was a sadistic monster who refused to stop kidnapping and effectively mutilating children. And while it’s possible – in fact I think quite uncontroversial – that Toby’s act was justified, and it’s flagrantly obvious that the Queen’s motivations for trying Toby are political rather than born out of a desire to serve justice, it’s interesting that McGuire’s focus remains on the Queen’s unfairness in bringing the trial at all rather than the fact that the trial is a sham. Toby is eventually exonerated through something of a legal technicality, but there’s still the suggestion that as a heroic figure she’s granted the latitude to operate outside the normal rules of Faerie – in the same way that her changeling status makes her an outsider to fae high society.

The question of whether Toby’s mind is her own, and the ever-present threat of madness that lies behind her actions, is I think the flipside to this privileged outsider status, madness and mental illness having been used throughout literature and history conceptually to neutralise those who would not or could not conform to social norms. So McGuire is using the threat of madness to index the potential vulnerability of fae society to someone who is allowed to operate outside fae laws as Toby is: she has the power to wreak great destruction on that society as well as to save it. Or, to put it more simply, her heroism is a danger as well as a help.

As I’ve said, these are all concepts that have been explored before in the context of the superhero genre, and while it’s interesting to see them used in an urban fantasy text I’m not sure that McGuire is doing anything new with them. Late Eclipses is also, for my money, the least interesting and distinctive novel of the series so far, replacing the folkloric resonance that differentiates the first three novels from the vast majority of urban fantasy with what are ultimately some rather mundane political manoeuvrings. It remains, nevertheless, a pleasant enough filler read, and I’m looking forward to thinking about how McGuire’s depiction of heroism evolves as the series continues.

One thought on “Review: Late Eclipses”