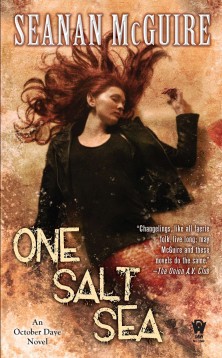 Five books in, it’s becoming increasingly apparent that Seanan McGuire’s Toby Daye series is very interested in family – both the nuclear kind and the found kind. It’s an interest that’s been present throughout the series: in its procedural focus on biological parentage and the power carried in the blood; in the fairy lord Sylvester’s complicated relationship with his traumatised daughter Rayseline; in the importance that fae culture places on which of Oberon’s wives everyone is descended from. But it’s brought into sharp focus in One Salt Sea when Toby must investigate the kidnapping of three children – one of them her own estranged daughter Gillian – in order to save the fae kingdom from all-out war.

Toby has a lot to lose by this point: having begun the series in Rosemary and Rue as an outsider, lost to her human family because of Faerie and thus too angry at the fae to associate with them any more, she’s spent five books forming social and familial connections that cement her place in fae society. Many of these bonds are bonds of obligation, the fae being big on promises and formal reciprocal arrangements: Toby has sworn an oath to serve her lord Sylvester; she and the sea-witch the Luidaeg are connected by a somewhat convoluted system of favours and debts; and by the end of One Salt Sea she has officially taken on the young fae noble Quentin as her squire. It’s clear that these essentially legal relationships are founded in real love and respect, although this isn’t always the case: for instance, Toby’s ultimate allegiance technically lies with the unstable Queen of the Mists, for whom she has only contempt.

Her less formalised relationships aren’t any less strong: look at her sister of sorts, May, the Fetch who was supposed to be an omen of her death and ended up moving in when she failed to die. And by One Salt Sea Toby has not one but two possible love interests: Connor, the Selkie whose marriage to Rayseline has been dissolved because of Rayseline’s instability; and Tybalt, the King of Cats, whose relationship with Toby has been shaky in the past but is gradually becoming stronger.

That last thing is key, I think: one of the things that powers this series is this process of Toby settling herself into a new family and society, forming new links over time. These relationships feel lived in, and Toby feels embedded in her world as a result.

This embeddedness ties in to the theme of heroism that I wrote about in my review of the fourth novel in the series, Late Eclipses. It’s clear that Toby’s connections to her community enable her heroism: they give her the emotional resources to protect those she loves at her own expense, and to go on when they’re removed from her life. Towards the end of the novel, Toby saves Gillian’s life by doing something that will mean she’ll never see her again: their estrangement will be permanent. It’s a devastating choice, but it’s a choice that she survives because of the support she gets from her friends and found family. Similarly, when one of her love interests dies at the end of the book, we get the sense that she’ll go on despite her grief because of the people she still has around her – unlike many a romantic heroine.

This is quite a nuanced look at the important role that community plays in allowing individuals to do good, and it’s one of the things that marks the Toby Daye series out from a lot of urban fantasy, which tends to be rather individualistic in focus. I do think the novels continue to suffer from repetitiveness – there’s a lot of running around that doesn’t correspond to actual plot development – and McGuire’s writing isn’t as polished as it could be. But this sense of groundedness in a specific community, a specific world with its own social rules, means it’s a series that I’ll keep returning to when I’m in the mood for a light, fun, satisfying read.