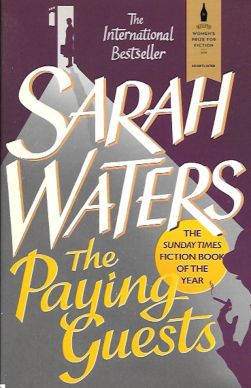 Ah, Sarah Waters. One generally knows where one is with one of her novels: she’s a fantastic writer of queer romantic suspense, using the heteronormative mores of her historical settings to keep her star-crossed lesbian lovers apart and creating labyrinthine Gothic plots that draw the reader inexorably in, under the hypnotic spell of her prose.

Her most recent novel, 2014’s The Paying Guests, fits this mould pretty well. Frances Wray and her mother are middle-class 1920s homeowners who have fallen on hard times since the war, and are forced, to their shame, to take in lower-class lodgers – the vivacious Lilian and her clerk husband Leonard. Frances and Lilian grow close, and eventually, inevitably, become lovers; Waters brilliantly evokes the claustrophobia of their affair, the sneaking, secretive assignations snatched in the moments when there’s no-one else in the house. But things turn sour when Lilian accidentally murders someone and the two women conspire to cover it up: can they evade the hangman’s noose and still preserve their love for each other?

What I found compelling about the novel as a queer reader was the sense of embattlement that these women experience: it’s quite literally them against the world, keeping their secret together in a way that’s analogous to the way they need to keep their relationship secret. The murder that Lilian commits is essentially an act of self-defence, carried out in response to a violent, homophobic attack on Frances; so the novel positions Lilian and Frances as wronged queers facing a hostile society and justice system. (Something else that Waters is very good on is class and social pressure: the gossip, the intrusive media interest, Frances’ mother’s disapproval of her friendship with a woman of a lower class are all just as oppressive as the actual court case.) Even in these times, when LGBT+ rights are becoming increasingly enshrined in law around the world (although not everywhere, and progress can be frustratingly slow), that’s very relatable for queer readers: the intense, heady delight of finding queer community; the costs of holding onto it, preserving it in the face of reckless hate and prejudice.

Ultimately, though, The Paying Guests isn’t that dissimilar in mood or content to the rest of Waters’ oeuvre, and it’s less twistily seductive than my favourite of her novels, Fingersmith and Tipping the Velvet. I enjoyed it – but for her next outing I’d love to see Waters doing something a little different.