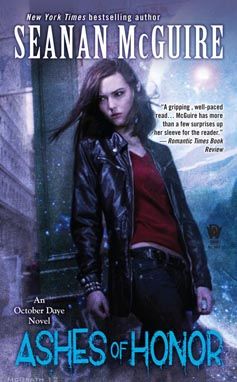 The sixth instalment in Seanan McGuire’s Toby Daye fae detective series, Ashes of Honor continues to build upon the novels’ interest in family and heredity. It’s at least the third book in the series to deal with disappeared children: this time, a heretofore unknown teenage changeling named Chelsea, the daughter of a knight of Toby’s liege lord Duke Sylvester and a human folklore professor at UC Berkeley, is teleporting uncontrollably, ripping open portals into the deep lands of Faerie and jeopardising the stability of the fae’s homes in the Summerlands. Toby, a changeling herself, is engaged by Chelsea’s father Etienne to find her and bring her home before others try to, more violently.

Something that I feel I’ve sort of been skirting around in my posts about the Toby Daye series is McGuire’s treatment of race and how it maps onto real-world civil rights issues. In one sense, the books are reasonably diverse, and become increasingly so as the series goes on: the fae don’t care about sexual orientation or skin colour, and in Ashes of Honor there’s at least one lesbian couple and two brown characters. (As a side note, though, I haven’t seen any real effort in this series to include global mythological traditions: Raj and Jazz remain embedded in a thoroughly Anglo-Celtic folkloric context, which has the probably unintended effect of subordinating non-Western traditions to the Western paradigm.) Skipping ahead a bit, the ninth book in the series, A Red-Rose Chain, features a transgender character who’s treated fairly well by the narrative.

It’s changelings who face the brunt of discrimination in Faerie: those unlucky enough to be born part-human, part-fae. At a certain age changeling children are offered a choice between their fae and human heritage: those who choose the fae world are taken forever from their human parent to face a lifetime of second-class citizenship in Faerie; those who choose humanity are discreetly murdered in order to preserve Faerie’s secrecy. It’s a rough deal, one that the series explicitly frames as a civil rights issue, talking about changeling rights and equality. And it’s not a huge leap from that to reading McGuire’s changelings as analogues for real-world mixed-race people.

Seen in this light, the solution that Ashes of Honor presents to changeling discrimination is rather unsatisfactory. Just as she did for her daughter Gillian at the end of One Salt Sea, Toby draws on her newfound powers to shift the balance of Chelsea’s blood, making her entirely fae to enable her to control her magic. This gives Chelsea a happy ending, allowing her to evade the oppobrium of changeling-hood while also staying with both her parents (since Sylvester allows Etienne to invite his human wife to live with him in Faerie, something that hasn’t been done for hundreds of years). Later novels in the series indicate that Toby sees this as a permanent structural solution to the loss and ill-treatment that changelings suffer. To me, though, it looks like erasure: instead of actually accepting changelings and treating them as equals, let’s just…make them not changelings any more? I’m reminded of Ernest Cline’s Ready Player One, which touts the internet as the solution to racism and sexism because everyone can just pretend to be white men. These are “solutions” that put the burden on the oppressed, not the oppressor, which is exactly backwards.

I’m not trying to suggest here that the Toby Daye books are particularly objectionable or deliberately racist: they’re no worse than a lot of Western mainstream fiction, and it’s also clear that McGuire is intentionally working to improve representation in a series whose first instalment was written 12 years ago. I do think the series is a good example of a text in which generic conventions – in this case the detective novel’s focus on individual trauma and the need to restore the status quo – are pulling against its overt concerns and themes: here, the attempt to work towards a structural solution to institutional discrimination. Sometimes that tension can be productive; for this series, though, it’s just limiting. Ashes of Honor is fun, but the novel, and the series as a whole, is not really equipped to deal satisfactorily with the anxieties it’s evoking.