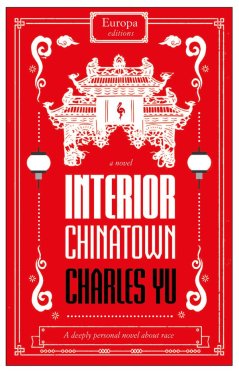 Charles Yu has form playing with genre. His first novel, How to Live Safely in a Science Fictional Universe, figures memory as time travel, squeezing a distinctly literary narrative about paternity and the construction of the self into the science fictional container of a time-loop story. It was possibly the first novel I read that made me realise, consciously, what SF could do as a genre.

Interior Chinatown pulls off a similar trick. Told in screenplay format (Yu has written for the show Westworld, among others), its protagonist is Willis Wu, bit-part actor in the cop drama Black and White. Willis, described in the script as Generic Asian Man, aspires to the impossible dream of becoming Kung Fu Guy,

maybe not a real, regular star, let’s not get crazy, we’re talking about Chinatown here, but perhaps a Very Special Guest Star, which for your people is the ceiling

This on page 26: the novel sets out its stall right from the beginning. Refracted through the lens of satire and of the detective show format, this is a story about the racism Asian people face in the US and the ways in which that racism limits what they can achieve and be.

Formally, the novel is a dazzling thing, layers of metatextuality and metaphor reinforcing each other to drive the point home. The screenplay format, which might look like a bit of a gimmick, is actually doing a fair amount of work: it allows Yu to talk about the roles people play or are assigned in a general sense; it summons up the idea of Hollywood and the TV industry as arbiters of how Americans – and Westerners in general – read the world; it illustrates how the stereotypes we see in the media control how people are treated in reality. Yu’s constructed universe has layers of reality to it: the world of Black and White is both fictional and “real” (real, that is, in the terms of the text), just as the world of How to Live Safely is both “real-to-the-text” and explicitly metaphorical. The screenplay format allows Yu to delineate the relationship between the fictional and the real.

It’s a genuinely clever conceit, one that makes Yu’s point – an important and necessary one – essentially on its own. That’s the book’s triumph and, for me, also its downfall. With the novel’s position laid out in its first fifty pages, there’s nowhere really for it to go. One of the great pleasures of How to Live Safely in a Science Fictional Universe is its narrative shape, the time loop giving it a cohesiveness, a sense of completion. Interior Chinatown has no such shape: things happen in Willis’ life, but they don’t – to my mind – advance or elaborate on the thematic arc. The novel’s brilliant form eclipses its narrative movement entirely.

This second novel of Yu’s would have made a fantastic short story. Even a novella! At novel length it’s merely interesting. Willis’ genericness, which of course is part of Yu’s point, nevertheless left me too little to grab onto to power the whole book. I wanted more character specificity, a tighter plot, a stronger story engine to chew on.